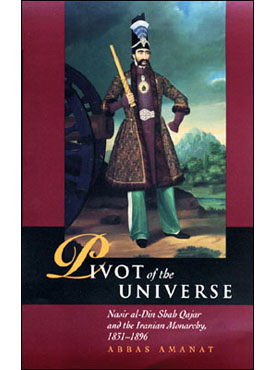 Pivot of the Universe: Nasir al-Din Shah Qajar and the Iranian Monarchy

When he was assassinated in 1896, Nasir al-Din Shah had sat on the Peacock Throne for nearly half a century. A colorful, complex figure, he is frequently portrayed as capricious and indulgent. Yet he was in many ways an effective ruler who displayed remarkable resilience during his long reign in the face of dilemmas and vulnerabilities shared by most monarchs of the Islamic world in the 19th century.

In this book, the first in English about Nasir al-Din Shah, Abbas Amanat gives us both a biography of the man and an analysis of the institution of monarchy in modern Iran. Amanat poses a fundamental question: how did monarchy, the centerpiece of an ancient political order, withstand and adjust to the challenges of modern times, both at home and abroad? Nasir al-Din Shah’s life and career, his upbringing and personality, and his political conduct provide remarkable material for answering this question. By examining the way Nasir al-Din Shah was transformed from an insecure crown prince and later an erratic boy-king in the 1840s and 50s into a ruler with substantial control over his government and foreign policy in the 1860s and beyond. Amanat explores a pattern in the consolidation of traditional monarchies as they accommodated themselves to the forces of modernity.

Based on extensive archival research in both public and private collections, illustrated with drawings and photographs from the period, Pivot of the Universe offers a fresh interpretation of the evolution of monarchy in modem times as it interacted with the institutions of government, the society at large, and Western powers. The social and cultural themes first evident in Nasir al-Din Shah’s reign – especially Iran’s position in the Islamic world and its encounter with Western powers – have shaped the course of Iranian history since his death.

“Lucidly demonstrates how much Nasir al-Din’s approach to government owed to his understanding of time-honored Iranian traditions of kingship. The depth of Amanat’s analysis enables him to place the beginning of this monarch’s life in its true historical context… An outstanding work.”

“Explores the institution of monarchy in Iran through a biography of the Qajar Dynasty ruler who was assassinated in 1896.”

“Amanat’s biography of Nasir al-Din Shah sheds profound illumination on the historical development of Iran. . . . He makes his analysis implicit in his eloquent, textured and sensitive narrative. We are given a shah’s-eye view on issues ranging from Ottoman oppression of Shi’ites in Iraq to British imperialism in Afghanistan and the Persian Gulf. It is both fresh and fascinating.”

“Amanat’s book combines formidable scholarship with an understanding of broad historical questions and human interaction. He has created a book that is readable, reliable, and full of ideas, which will be a must-read for all interested in Iranian history or in historical comparisons.”

“At Nuri’s request and with the shah’s approval, Sheil agreed to intervene. Thus, the appointment of Amir Kabir to the governorship of Kashan, a provincial seat sometimes reserved for high-ranking statesmen and notables who had fallen from favor, was guaranteed by the British minister. Sheil’s assurances to Amir Kabir that the safety of his, and his family’s, life and property would be safeguarded by the British mission and that he would govern respectfully and unmolested provided an acceptable alternative to Amir Kabir’s request for asylum. . . . The guarantee of safe passage to ousted premiers was not unfamiliar in Qajar Iran. However, his appeal for protection highlighted a sad irony, not only because he consistently fought against the missions’ misuse of diplomatic privileges but also because of his policy of abolishing the institution of bast.” (page 150)

“On 28 November 1855 Nasir al-Din Shah wrote to Nuri in a private note: Last night, that is the night of Sunday 17 Rabi’ al-Awwal, was the night of the birthday of the Prophet, praise be to him and his family. In a dream I saw a garden with a tall, massive pine tree in the middle. I was viewing it from a distance and the name of the tree was Victoria. Indeed, that tree was the country and the monarchy of England. I ordered the pine tree called Victoria to be uprooted and replanted in another location and said: ‘Call it Muhammad. Victoria is bad.’ What was remarkable about the shah’s dream was not only its naked symbolism, almost too perfect to be subliminal, but also its timing. On 27 November, after three weeks of vehement quarreling with Murray, the break in Anglo-Persian diplomatic relations was finalized. The shah’s dream, for all its spontaneity, fit well into a course that was destined to be one of the most critical in Nasir al-Din’s reign. In the Hashim Khan affair, as the episode leading to the break in relations came to be known, all the various themes from the early life of the shah seemed to converge.” (page 265)