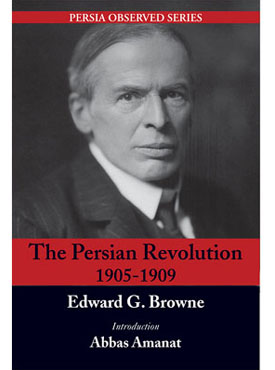 “Many dangers and many anxious days lie without doubt before the new Persia.”

More than eight decades later, Edward Browne’s fears and hopes have a special resonance in the minds of contemporary readers. The Persian Revolution of 1905-1909, an account of one episode in Iran’s eventful annals, has maintained its relevance and freshness, even after the occurrence of a revolution more intense and all-embracing than the Constitutional Revolution of 1906-11. When the aspirations of the Constitutional period are contrasted with those of the more recent revolution, the irony is poignant and inescapable, especially when it is noted that the occurrence of the second revolution was a distant protest against the failure of the first.

What Browne primarily intended to achieve in his book was to allow the voice of the Persian people to be heard by his Western audience. He tried to demonstrate to his readers that the tumultuous events they were witnessing in Iran, often with suspicion if not disdain, were in fact no less than a genuine struggle by an oppressed and impoverished nation to establish a constitutional order despite the overwhelming odds of domestic tyranny, foreign intervention, and ideological divisions. The Persian Revolution was more than a simple record of a revolution, for it influenced the very course of events it covered in its pages.

An essential volume for anyone attempting to understand Persia’s past and present, this new edition features an introduction by Abbas Amanat, Browne’s correspondences, and contemporary reviews of the book, all of which provide a rich context for The Persian Revolution of 1905-1909. Also included are 56 period photographs.

Note: This book was originally published in 1910 by Cambridge University Press.

“Browne labours to show that the Persian Revolution was no mere isolated phenomenon, but one form of a movement which is affecting Islam.”

“No history of events in Persia between the years 1905 and 1909 is ever likely to compete with this.”

“A large amount of information which is of the upmost value…”

” In this account of Iran’s Constitutional Revolution, British Orientalist Edward G. Browne portrays Persia as a nation oppressed by its leadership and foreign interests, struggling to establish a constitutional government. In the introduction to this reprint of the 1910 edition, Abbas Amanat writes that Browne’s description is unique in that, amidst a time of imperialism and orientalism, it speaks sypathetically of a nation’s aspirations to shape its own political system.”

However, upon Ferriol’s recall from Turkey in 1711, Fabre’s widow returned from Constantinople, and although she had every reason to hate her late husband’s mistress, she gave evidence on her behalf. It was probably her intervention which led the judicial authorities to take a more lenient view of Marie’s conduct, and in 1713 she was released.

As a Professor at Cambridge University, Edward Browne was considered the foremost scholar of Persian studies of his time. In addition to The Persian Revolution of 1905-1909, he wrote A Year Amongst the Persians, and A Literary History of Persia.