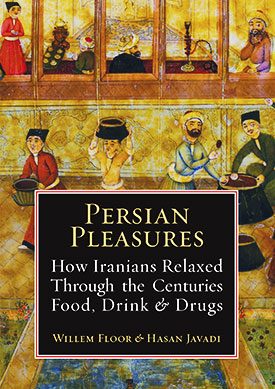 Persian Pleasures: How Iranians Relaxed Through the Centuries with Food, Drink and Drugs (Kindle Edition)

Pleasure in the form of food, drink or drugs, is the subject of this book, which looks at how their consumption has played a key role in social interaction in Iran for the past 2,500 years and how this has evolved over time, shaped by changes in Iranian society and Persian culture as a whole.

Food has always been about more than just fuel: a meal is a feast for the senses, as well as an occasion to relax and be sociable, aspects that the many foreign travelers to Iran have commented upon over the centuries. One of the opening chapters allows us to see Iranian food and customs through foreign eyes in a fascinating overview of the subject. A further insight into Iranian food from the past is offered by the work of the fifteenth-century Persian poet Boshaq, nicknamed At‘ameh/the Gourmet. Long before cooking became a television phenomenon in America, he decided that food made a good subject for poetry and his poems reveal what would have been on the menu for the well-to-do Iranians of his day.

Drinking together was even more of a social event in Iran than sharing food, in particular when enjoyed with regular companions and in the comfortable surroundings of a familiar social venue. The next two chapters look at the rise of the coffeehouse in the seventeenth century, important as a meeting place for various social, artisanal or political groups, to discuss ideas, swap news, or play chess and other games. We then see how, by the nineteenth century, Iran had transitioned from a country of coffee drinkers to a nation of tea drinkers and learn how coffeehouses turned into teahouses without even changing their name.

In the seventeenth century, tobacco from the New World was introduced to Iran and quickly became a passion, not to mention another pastime that could be enjoyed in the relaxing environment of the coffeehouse. Chapter seven takes an intriguing look at tobacco cultivation and Iranian smoking customs and paraphernalia through the ages, from the traditional water pipe to the modern cigarette, while an extensive later chapter provides wide-ranging analysis of the use of psychoactive drugs in Iran from the earliest times to the present in the most detailed study of the subject available to date.

Iranians were also once a nation of wine drinkers, and a substantial section of the book is devoted to tracing the history of wine production and consumption in Iran from its peak in imperial times to its gradual decline as Iranian society became more Islamic. Although alcohol and certain drugs have been considered unlawful in Islamic Iran at different periods, they have been tolerated to some extent because of the enjoyment and sociability they offer and because physical intoxication was/has been regarded by the Sufis as akin to the spiritual rapture experienced when in communication with the divine. The Islamic ban has even been seen as non-Qur’anic by some.
As a means of banishing melancholy arising from a sense of alienation felt by Iranians through the ages, sociability has always been very important, today more than ever, enhanced by the pursuit of keyf in all the forms presented here. Carefully researched and full of fascinating detail, Persian Pleasures takes a fresh look at a complex topic, with findings that, despite the apparent familiarity of their subject matter, may surprise the reader and give abundant food for thought.