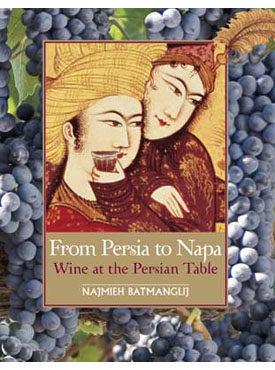 From Persia to Napa: Wine at the Persian Table (Kindle/iPad/Apple eBook Version)

Available for the Kindle, iPad & Apple eBook, or in Hardcover.

Wine is seen as the natural partner of many great cuisines, but few people associate it with Persian food, one of the world’s most sophisticated culinary traditions. The ties, in fact, are age-old. From Persia to Napa: Wine at the Persian Table (Mage; $50; 264 pages, with 160 color photos) weaves together history, poetry, a look at modern viniculture, and a wealth of recipes and wine pairings to celebrate the rightful relationship of wine and food on the Persian table

“Whoever seeks the origins of wine must be crazy,” a Persian poet once declared, implying that simple enjoyment of this greatest gift of the grape ought to be enough. Since he wrote those words, however, winemaking has been traced all the way back to the northern uplands of the Fertile Crescent some seven millennia ago, the start of a journey that would take it across the Near East and then into Europe in the dawning years of civilization. Iran was one of the nurseries of the wine grape, and, as empires rose and fell there, princes, priests, poets and people in ordinary walks of life all embraced wine in various ways. After Islam came to Iran, wine drinking sometimes slipped from public view, but it never disappeared.

In this lavishly illustrated book, Najmieh Batmanglij explores that long and eventful history, then shifts her story to California’s famed Napa Valley, half a world away. There, in a kind of up-to-the-minute homage to the past, an Iranian-American named Darioush Khaledi uses the latest vinicultural techniques to make superb wines at a winery reminiscent of Persepolis, the ceremonial capital of the ancient Persian empire.

The final section of the book offers 80 recipes, a guide to Persian hospitality, both old and new, and seasonal menus for various occasions. Grapes play a role in most of the recipes, whether in the form of the fruit, the leaf, the juice, the syrup, unripe grapes or their juice (verjuice), vinegar or wine. Although these recipes are presented for the modern table, they are traditional—based on sources as various as a tenth-century Persian cookbook or the culinary archives of a sixteenth-century Persian court.

The book has two special sections. One, written by Dick Davis, a leading authority on Persian literature, discusses the unique links between poetry and wine-drinking in Persian culture. The other, by wine-and-food expert Burke Owens, offers guidelines for pairing wine with the distinctive ingredients used in Persian cooking. He has also provided wine suggestions for each recipe.

“The issue of the Islamic prohibition of wine-drinking and the widespread disregard of this prohibition among Muslims looms large in Najmieh Batmanglij’s From Persia to Napa: Wine at the Persian table, a lavishly illustrated book which presents a history of wine-drinking in pre-Islamic and Islamic Persia, followed by an account of the Darioush winery’s current production of Shiraz and other wines in California’s Napa Valley, while a third section provides a selection of recipes chosen to go with particular wines.

One verse in the Koran appears to approve of wine: “We give you the fruit of the palm and the vine from which you derive intoxicants and wholesome food” (sura 16:69). However, the orthodox Muslim view is that this verse was abrogated by other Koranic verses. But heavy drinking had been an important part of the court culture of Sassanid Persia prior to the Islamic conquest, and the aristocracy went on drinking in Muslim Iran. Kaikakavus, a Persian prince from Gurgan, wrote a guide to aristocratic conduct which contained the following advice: “Wine drinking is a transgression; if you wish to commit a transgression it should at least not be a flavourless one. If you drink wine, let it be the finest – so that even though you may be convicted of sin in the next world, you will at any rate not be branded a fool in this”. There is, moreover, a remarkably rich body of wine poetry in Persian, as well as in Turkish and Arabic literature.

As Batmanglij notes, Muslims who wished to drink alcohol gave a variety of excuses. Wine was being drunk as a medicine. It was alleged that the Koran only forbade over-indulgence in wine. Wine that was diluted or boiled was acceptable. The ban applied only to wine and not to arak, beer, or fermented mare’s milk. Dick Davis, the eminent translator of classic Persian texts, has contributed an excellent chapter on “Wine and Persian Poetry” in From Persia to Napa in which he points out that the heroes of Firdawsi’s great epic, the Shahnama, drank heroically. He also discusses the metaphorical employment of “wine” in Persian Sufi poetry to signify ecstasy. Though many Sufi poems have survived in which this is indeed the case, Davis is rightly doubtful about the automatic translation of wine as some figurative reference to a spiritual experience. “Sometimes, and perhaps usually, a cigar is just a cigar – and wine just wine” according to Davis, paraphrasing Freud. In particular, Davis is sceptical about the wholesale assimilation of the fourteenth-century poetry of Hafiz of Shiraz into the mystical canon: “My own feeling is that he is almost always writing about what he says he is writing about, wine and carnal love, and that his occasional hankerings for a more secure and spiritual world safe from the vicissitudes of earthly life, are just that – occasional hankerings”.”

This is much more than just another coffee table decoration about wine and food, or both. A lavishly illustrated volume, it is the third book written by Najmieh Batmanglij in her passionate promotion of Persian cuisine and, in this case, the rich and – despite Tehran’s strict Muslim regime – continuing Iranian love affair with wine.

Batmanglij and her wine enthusiast husband Mohammad fled post-Islamic Revolution Iran as refugees and now live in the US. She has spent 25 years traveling, teaching cooking and adapting authentic Persian recipes to Western tastes and techniques.

Persia is one of the cradles of wine grape cultivation, with the city of Shiraz one of its earliest centers of production, and Batmanglij traces this illustrious history in fascinating verbal and pictorial detail. She then moves half a world away to California’s Napa Valley, where another iranian-American, Darioush Khaledi, has re-created the architecture of the ancient Persian ceremonial capital of Persepolis in building a spectacular winery.

The final section of the book contains 80 delectable recipes, seasonal menus and a guide to Persian hospitality both past and present. And there are two special sections by guest authors – one discussing the Persian links between poetry and wine, and the other suggesting how to match wines with Persian cuisine. In all, a wonderfully complete package.

Iran is not famous for its winemaking, and we’ve yet to see a sommelier in a Persian restaurant anywhere, but Najmieh Batmanglij’s latest book sets out to change that. Batmanglij is a culinary ambassador of sorts, already having written four Persian cookbooks that read like encyclopedias of the very old but relatively unknown Persian cuisine. So it is fitting that she examines the even lesser known tradition of Persian winemaking and wine drinking in From Persia to Napa: Wine at the Persian Table. Part cookbook, part history lesson, and as meticulously thorough as her other books, this book traces Iranian viniculture from ancient times to Napa’s Darioush winery, which is styled after Persepolis. The emphasis on history, illustrated with plenty of classical Persian art and a section on references to wine in Persian poetry make From Persia to Napa appealing to the bookish set. But it’s also great for readers who like to eat and drink, too: More than half the book is devoted to food, with wine notes and pairing advice supplied by Burke Owens, a longtime Persian food buff and the associate director of wine at COPIA, the American center for Wine, Food and the Arts. And for those already familiar with the cuisine, Batmanglij’s recipes include a good number of more unusual Persian dishes, like pistachio soup (paired with a pinot gris or viognier), or a dessert of quince baked in pomegranate juice and grape molasses (for zinfandel, grenache or a sweet Sherry).
–Wine & Spirits Magazine, December, 2006

The popular author of well-respected cookbooks like New Food of Life and A Taste of Persia has turned her attention to the tradition of wine at the Persian table. Contrary to popular belief, wine has been featured in Persian literature and history for thousands of years. Shiraz, which many people associate with the wines of Australia and France, was an ancient Persian wine-producing city. This work will interest a wider audience than a general cookery book owing to its introduction carefully tracing the history of wine as it relates to Persian culture; there is a thoughtful chapter on wine in Persian poetry. The recipes, ranging from appetizers to desserts, specify both the preparation and the cooking time, a useful inclusion for the home cook. Batmanglij also provides a list of contacts for hard-to-find ingredients. The book’s large format and lavish illustrations make it an attractive addition to larger public libraries and perhaps academic ones, too. 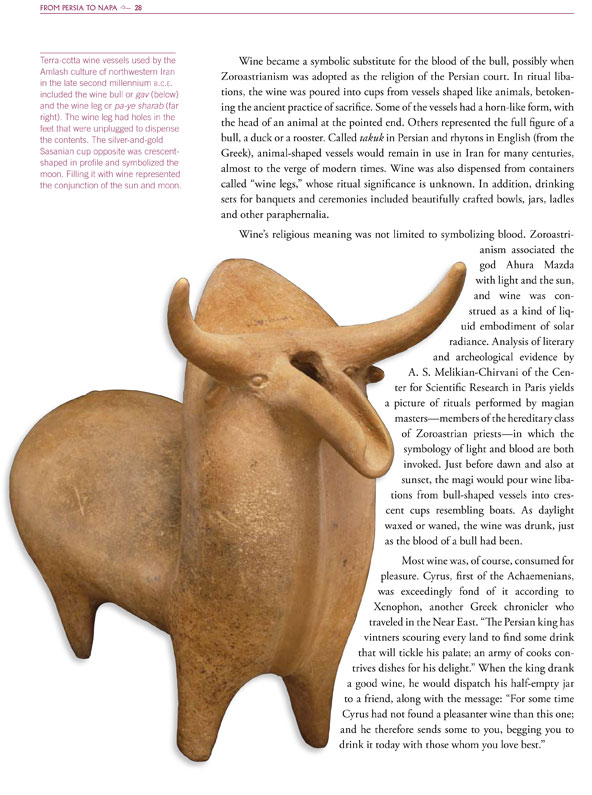