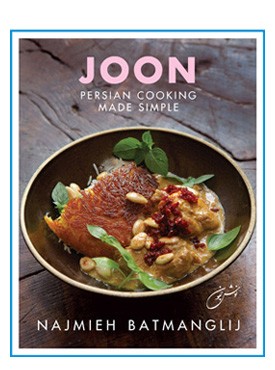 Available for the Kindle, iPad, & Apple eBook or in a Hardcover edition.

In Joon, master chef Najmieh Batmanglij distills one of the world’s oldest and most influential cuisines to capture its unique flavors in recipes adapted to suit our busy lives. Najmieh’s fans have been making meals from her Food of Life for more than 30 years. For Joon she has simplified 75 of her favorite dishes and shows how, with the right ingredients and a few basic tools and techniques, authentic Persian food can easily be prepared at home.

Joon means “life” in Persian. It can be used in multiple ways, from a term of endearment akin to “darling” after someone’s name to showing great enthusiasm: “I love it!” The expression nush-e joon, literally “food of life,” is similar to the French “bon appétit,” a wish that a meal will be enjoyed.

Iran and Persia refer to the same place. These days we use “Iran” to refer to the country and “Persia” or “Persian” for the culture, from Persian carpets, and Persian cats to, Persian cooking. Persian, also called farsi, is the language of Iran.

Iran is situated at the center of the ancient network of trading routes—known today as the Silk Road—that connected China in the east to Italy in the west. The royal kitchens of two ancient Persian empires, a thousand years apart, were famous for their cooking, which both influenced and was influenced by the cuisine of countries along the Silk Road. Later, in the ninth century, it was the Arabs of the Abbasid court in Baghdad who spread Persian culture and cooking more widely in Europe and North Africa.

Much of Iran’s cuisine is essentially vegetarian. Although kababs are popular restaurant fare, they represent only a small sampling of the dishes Iranians eat at home. Persian cooking, with its emphasis on fresh, natural ingredients corresponds with the trend in eating that’s spreading across America. “Join the delicious revolution!” as Alice Waters says; “Eat simply, eat together, eat seasonally, shop at farmers markets.”

The recipes in this book—each accompanied by a photograph of the finished dish—come straight from Najmieh’s kitchen and include not only the classics of Persian cooking, but also some soon-to-be favorites, such as quinoa or kale cooked Persian-style. You’ll discover delicious side dishes, from cooling, yogurt-based salads and tasty dips and spreads, to more sustaining platters of grains, beans and fresh herbs; tasty “kukus”—frittata-style omelets filled with vegetables and herbs; spice-infused fish; mouth-watering meatballs and kababs served on flat breads with tangy sauces; every kind of rice—including the incomparable polow topped with various sweet and sour braises; not to mention, delightfully aromatic cakes and cookies to round off meals or enjoy as a snack in between.

So, jump in and explore. You will find inspiration as well as practical guidance: a great age-old cuisine presented for today’s world.

Najmieh Batmanglij was born and raised in Iran. During her childhood, her mother wouldn’t allow her in the kitchen. “Concentrate on your education,” she would say. “There will be plenty of time for you to cook later in life.”

Najmieh came to America in the 1960s to study at university and would cook Persian food with fresh local produce using recipes sent by her mother in letters. Her housemates loved the food she made and encouraged her to cook all the more. Little did she know that the American food revolution had just begun. Later, when Najmieh returned to Iran with her master’s degree in education in hand, her mother welcomed her into the kitchen and started to work with her.

At the end of 1979, as the Iranian Revolution took a more fundamentalist turn, Najmieh and her husband fled to France, where their first son Zal was born.

It was in France that Najmieh decided to follow her passion for cooking. With the help of her friends and neighbors, she wrote her first cookbook, Ma Cuisine d’Iran.

In 1983 she and her husband emigrated to America, where she gave birth to their second son, Rostam, and wrote her first book in English, Food of Life.

Najmieh has spent the past 35 years cooking, traveling, and adapting authentic Persian recipes to tastes and techniques in the West. She has been hailed as “the guru of Persian cuisine” by The Washington Post. Her Food of Life was called “the definitive book on Iranian cooking” by the Los Angeles Times. Her Silk Road Cooking was selected as one of the 10 best vegetarian cookbooks of 2004 by The New York Times; and her book From Persia to Napa: Wine at the Persian Table won the Gourmand Cookbook Award for the best wine history book of 2007.

Najmieh is a member of Les Dames d’Escoffier and lives in Washington, DC, where she teaches Persian cooking, and consults with restaurants around the world. Her web site is www.najmieh.com.

This pdf file will open in a new window, or you can download it and open it in the Adobe Viewer – Joon_PersianCookingMadeSimple_PressRelease