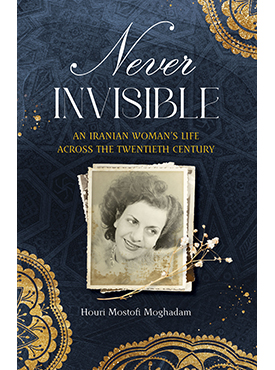 A remarkable woman who lived through extraordinary times, Houri Mostofi was born in Tehran, Iran, in 1919, descended on her mother’s side from Iranian royalty and on her father’s from a “God-fearing” family of scholars and government administrators. When she was twenty-two, Houri married Mohsen Moghadam, a young man from a merchant family who went on to become a successful businessman, often traveling abroad, while Houri dedicated herself to teaching, charitable public works, and running international women’s associations in Tehran. Together, they also raised three children, in whom Houri was keen to instill the same spirit of
industry and self-discipline she had learned from her own parents.

Houri was among the first women to go to university in Iran, working as a teacher for nearly forty years and diligently continuing with her own education in later life, including traveling to the U.S. as a Fulbright Scholar, and, after being forced into exile following the Islamic Revolution of 1979, studying for a PhD at the Sorbonne in Paris. From a privileged social class, with a glamorous, jet-setting lifestyle, Houri was a pioneer, nonetheless, and a feminist for her own time. Through her hard work and frequent acts of bravery—from standing up to sinister intruders to dogged persistence in the face of intransigent officialdom—she made sure that, as a woman, she was never overlooked, never invisible, even when hidden under a dark chador at the Revolutionary Court. It was women like Houri who were the precursors of the young women fighting for equal rights and justice in Iran today.

The resulting memoir tells the fascinating story of her life, with all its ups and downs, triumphs and tragedies, set against the backdrop of an impending revolution that would topple the world she and her family had always known and turn it upside down.

Privilege, along with innate gifts of intelligence and determination, shaped Houri Mostofi Moghadam in many ways, all vibrantly evident in Never Invisible. Drawn from her diaries, it documents the sweep of a long and eventful life as the world around her changed, sometimes for the better, sometimes bringing cruel setbacks. Houri was born into a lofty social stratum in Iran, a milieu of arranged marriages, overseas education for the young, financial comfort, and effective control of political power. Her father–described by her as “a learned man, hard-working, honest, and God-fearing”–was a prominent government official who served in a range of postings abroad and across Iran. Houri’s own exposure to another culture began when she entered a Franco-Persian kindergarten at the age of four. In later years, she would attend university (permitted for women only after reforms by Reza Shah in 1934), teach French and English in a top Iranian high school, spend time in America on a Fulbright grant, and run an important charitable organization with many international members. Always, however, the center of her life was her family–raising three children, running a large household, and supporting the career of her successful businessman husband.

In mid-life, trouble arrived in many guises. Her marriage fell apart. She struggled with depression, moved abroad, bought an apartment in Paris, and, from a distance, watched in dismay as revolution broke out in Iran in 1978. In that upheaval, wrath and revenge was aimed chiefly at the upper class: One of her sisters and two uncles were imprisoned for a time. Houri did not return to Iran for 14 years. There, she found her house in ruins– “nothing left of the life we lived there.” Five more times she went back to seek some restitution, always in vain. But that was her way–a tireless fighter for what she saw as right, filling her life with activity and feeling, and brilliantly chronicling the flow of years in her diaries the whole while.