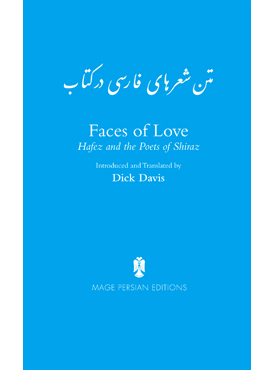 Persian text of the poems in Faces of Love: Hafez and the Poets of Shiraz (Kindle/iPad Version)

Available for the Kindle & iPad, and as a Paperback

English version of Faces of Love: Hafez and the Poets of Shiraz >>

Davis read English at Cambridge, lived in Iran for eight years (he met and married his Iranian wife Afkham Darbandi there), then completed a PhD in Medieval Persian Literature at the University of Manchester. He has resided for extended periods in both Greece and Italy (his translations include works from Italian), and has taught at both the University of California and at Ohio State University, where he was for nine years Professor of Persian and Chair of the Department of Near Eastern Languages, retiring from that position in 2012. In all, he has published more than twenty books.

Among the qualities that distinguish his poetry and scholarship are exacting technical expertise and wide cultural sympathy—an ability to enter into distant cultural milieus both intellectually and emotionally. In choosing his volume of poems Belonging as a “Book of the Year” for 2006, The Economist praised it as “a profound and beautiful collection” that gave evidence of “a commitment to an ideal of civilized life shared by many cultures.” the Times Literary Supplement has called him “our finest translator of Persian poetry.”