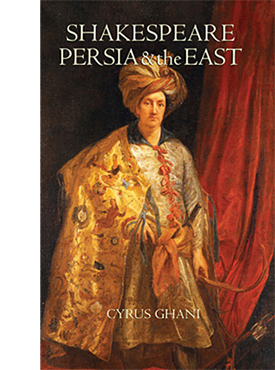 View Gallery
By Cyrus Ghani In History Tagged In Books by Cyrus Ghani, Drama, and Theater.

Shakespeare, Persia, and the East

No writer’s work has been studied more closely or often than the plays of William Shakespeare, that master of language and peerless explorer of the human heart. Books about him number in the thousands, yet Shakespeare, Persia, and the East brings a truly fresh perspective to his genius. In the three dozen plays he composed between 1590 and 1612, Shakespeare ranged far and wide in his imagination, setting some of his tales in places as varied as Denmark, Venice and Athens—while drawing on a rich array of imagery and lore from lands further east. This remarkable book by a lifelong student of Shakespeare Cyrus Ghani reveals how rich a source of inspiration those exotic Eastern realms were for the playwright.

Elizabethan England was especially fascinated by Persia, whose deep-rooted culture was then flourishing under the Safavid dynasty. An Englishman first visited there in 1562, two years before Shakespeare’s birth. More contacts between England and Persia followed, prompted by hopes of a lucrative trading relationship and a possible military alliance against the Ottoman Turks. A pair of English adventurers, Anthony and Robert Sherley, spent years attempting to establish these ties, not always scrupulously, and their story was well known to England’s greatest dramatist.

To illuminate the creative uses Shakespeare made of the East, this book first looks at the life of the playwright himself, then at the dynasties that did so much to shape England and Persia in that tumultuous age. Other sections in the book profile key figures in the efforts to forge a connection between the two lands, with particular focus on the colorful Sherleys and their fatally ambitious sponsor, the Earl of Essex—a great admirer of Shakespeare. The final section of the book briefly describes the plays and cites their many allusions to the East—testimony that this literary giant was very much a man of his time.

“The fruit of a lifetime’s devotion to English and Persian literature – learned, lucid, and full of unexpected insights into the Elizabethans’ fascination with the brave new world of the orient and its impact on Shakespeare’s unique imagination.”

–Al Alvarez
“Ghani (Iran and the Rise of Reza Shah; Iran and the West), a lawyer and Iranian scholar, here provides. . . a historical overview of Shakespeare’s Eastern inspirations. . . . The first four chapters provide historical background, while the final chapter provides an extensive listing of Persian and Eastern references in Shakespeare’s plays. . . a pleasant read. . . takes on an aspect of Shakespeare studies that has not been as extensively researched as some of the more mainstream topics.”
–Library Journal