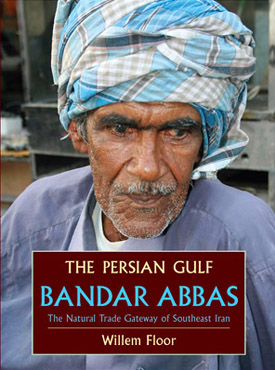 Bandar Abbas, once a small fishing village, became the gateway port for Iran after Shah Abbas defeated the Portuguese in 1622. However, with the fall of the Safavids and the withdrawal of the British East India Company in 1759 the port went into decline; by 1793 Bandar Abbas was under the direct control of Oman. In 1869 Iran had to resort to force of arms to take it back from Oman.

Yet, this important port is hardly mentioned in the histories of Iran. For the first time in Bandar Abbas: The Natural Trade Gateway of Southeast Iran, Willem Floor, using primary sources, analyses the port’s morphology, population, water supply, health, education, and living conditions during the Qajar period. Furthermore, he discusses in detail how Bandar Abbas came under Omani control; how the Qajars assumed direct control; as well as the town’s vicissitudes under a parliamentary governed Iran, and the new centralizing Pahlavi state.

The book also gives a detailed analysis of the nature of Bandar Abbas’s trade and the reasons for its ups and downs; the role of European political and economic activities; central government institutions that were present in Bandar Abbas and the many new institutions that were created in the twentieth century. A similar comprehensive analysis is offered for Minab (a nearby town) with which Bandar Abbas had a symbiotic relationship that changed in the twentieth century.

Based on primary sources this study of a major Persian Gulf port offers a comprehensive view of the “growing-up” pains Iran had to suffer to find its way into a modernizing world.

The previous volumes of the series are: The Persian Gulf: A Political and Economic History of 5 Port Cities, 1500–1750; The Rise of the Gulf Arabs, The Politics of Trade on the Persian Littoral, 1747–1792; The Rise and Fall of Bandar-e Lengeh, The Distribution Center for the Arabian Coast, 1750–1930