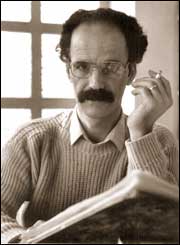 Fiction writer, critic, and editor, Houshang Golshiri was born in Isfahan in 1937. He was one of the first Iranian writers to use modern literary techniques, and is recognized as one of the most influential writers of Persian prose of the twentieth century. In 1965 Golshiri helped to found Iran’s chief literary journal, and in 1968 he established, along with other writers protesting government censorship, the Iranian Writers Association. Golshiri’s stories and efforts to establish basic rights for writers landed him in trouble– including imprisonment and a ban on his books–with both the Pahlavi regime and the Islamic Republic. In 1999 he was awarded the Erich-Maria Remarque Peace Prize for his struggle to promote democracy and human rights in Iran. Golshiri died, allegedly of meningitis, on June 5, 2000, in Tehran.

Mage has published a collection of his short stories, edited by Professor Heshmat Moayyad, called Black Parrot, Green Crow, as well as his novella, King of the Benighted first published by Mage in English under the psuedonymn Manuchehr Irani, translated by Abbas Milani. Houshang Golshiri’s stories “The Wolf” and “Portrait of an Innocent” in Stories from Iran: A Chicago Anthology.