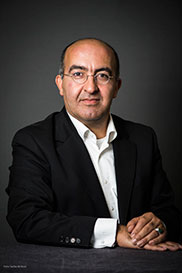 Ali-Asghar Seyed-Ghorab received his PhD from Leiden University where he has been teaching since 1997. He is Professor of Persian and Iranian Studies at Utrecht University, and Associate Professor of Persian at the Department of Middle Eastern Studies and is the track-leader of the Persian and Iranian Studies program at Leiden University. He has taught a wide range of courses:  classical and modern Persian literature, Sufism, Introduction to Area Studies, Introduction to Shiism, Iranian cinema, Literature and Politics in Persian Speaking world, and Classical Persian Poetry as a Living Tradition. Seyed-Ghorab has received several prestigious awards for his research and services to the field. He has served on several international committees for Iranian Studies and has been a member of editorial boards of journals. He has authored, edited, and translated books on Persian art and literature, Sufism, and Persian manuscript tradition. He has translated several volumes of modern Persian poetry into Dutch, including the poetry of Sohrâb Sepehri, Forugh Farrokhzâd, Mohammad-Rezâ Shafi’i-Kadkani, and (together with J.T.P. de Bruijn) Ahmad Shâmlu, Nâder Nâderpur, and Hushang Ebtehâj. His research concentrate on the triangle of literature, politics and religion, examining the application of classical Persian poetry in modern politics. He is the founding general editor of the Iranian Studies Series at Leiden University Press and the Modern Persian Poetry Series.