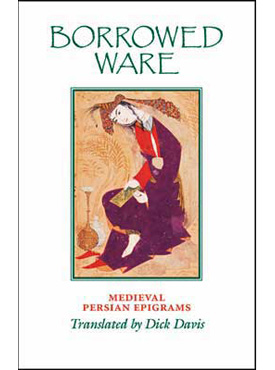 In Borrowed Ware, poet and translator Dick Davis brings together a collection of epigrams by poets from the “classic” period of Persian literature. It makes a fascinating introduction to a literature that is little known in the West, and incidentally provides insight into a vanished and extraordinary way of life. Davis’s prodigious scholarship of Persian poetry has enabled him to select a wide range of poems, from both famous and little-known poets. The result is some of the best English translations of Persian poetry ever. Davis has maintained exceptional faithfulness to the original Persian while recasting the poems’ grace and drive in English. The book also contains a lucid and entertaining introduction, and informative notes on each of the sixty-eight poets whose work is included. Each poem is faced by the text in delicate Persian nasta’liq calligraphy by Amir Hossein Tabnak.

The Independent: “Dick Davis’s translation of the best of Persia’s medieval short poetry, borrowed ware, is a wonderful book, suffused with love, beautifully produced and with a comprehensive introduction to Persian courtly poetry.”

The Atlantic Monthly: “Mr. Davis has put what he called “Medieval Persian Epigrams” into easy, idiomatic English and provided an engaging introduction to the Persian world and an explanation of the code words that might otherwise puzzle modern readers. These authors were court poets, highly valued and well rewarded for wit, elegance, and a light touch. Originality of theme was not necessary, but there are surprises among the lovers’ laments and financial complaints. Jahan Khatun, one of the few women poets, considered erotic reform but decided to “renounce renumerations.” (A contemporary accused her of being a prostitute, but Mr. Davis points out that he “said this kind of thing” about everybody.) The poems are faced by versions in Persian scripts, making the collection pretty as well as amusing.”

Times Literary Supplement: “Many of the best poems in borrowed ware are mystical, and Davis is probably the first translator to have succeeded in conveying their intensity of focus. . . . Anyone doubting Davis’s own mastery of [poetry] should turn to borrowed ware. This anthology is the most personal of Davis’s excellent translations from the Persian. . . . Here, as in Western poetry of a similar period, the subjects are mostly religious and amorous, with some politics thrown in and a good deal of flattery for patrons. Yet these subjects, through their tone and imagery, invite into the book the whole range of that far-off culture’s concerns.”

Kirkus Reviews: “Whatever these short and witty epigrams sound like in their original language–which is included here for those who can read such calligraphy!–they are delightful as re-created in English by Davis, a poet and professor of Persian. All drawn from the classic period of Persian poetry (the 10th through 16th centuries), these public and formal poems–whether capturing a moment’s mood or praising a courtier–come alive in Davis’s scrupulous translations, invigorated with a user-friendly scholarly apparatus.”

A Note on the Text
The texts for the poems translated here are taken from the following books:

In preparing the brief notes on individual poets my chief debt is to Dr. Zabihollah Safa’s Tarikh-e Adabiyat dar Iran (‘History of Literature in Iran’, 5 vols., Tehran, reprinted 1366/1987). I have also made use of Dr. Mohammad Amin Riahi’s introduction to his edition of the 14th-century anthology of rubaiyat, the Nozhat al-Majales (“Pleasure of the Assemblies”), as well as using material from other sources.