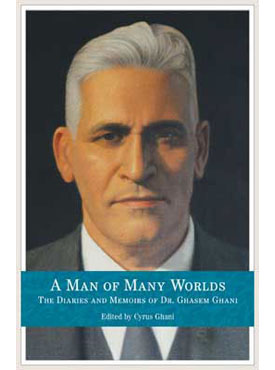 A Man of Many Worlds: The Diaries and Memoirs of Dr. Ghasem Ghani

Rare is the life lived at the center of history-shaping events, and rarer still the combining of such a life with brilliant gifts of observation and expression. Dr. Ghasem Ghani of Iran was such an individual. His recollections of a career of pioneering scholarship and diplomacy have been published to great acclaim in twelve volumes in the original Persian. Now his son has edited and abridged this record into a single volume in English A Man of Many Worlds: The Diaries and Memoirs of Dr. Ghasem Ghani. For anyone interested in modern Iranian history and the interacting traditions of East and West, it is essential reading, full of insightful observations and comments that are relevant today.

To call Dr. Ghani’s mind wide-ranging verges on understatement. Born in Sabzevar, in northeastern Iran, in 1892 and trained as a physician in Beirut and Paris, he established the first hospital in his hometown. Fluent in English, French and Arabic, he was an avid reader of such Western thinkers as Ralph Waldo Emerson and William James, and translated several of the novels of Anatole France into Persian. He attended lectures by Sigmund Freud in Vienna in the late 1920s and taught psychology and medical ethics at Tehran University. In the late 1930s and early 1940s, he collaborated with two leading scholars of Persian literature to publish in Persian a new, corrected edition of the poems of Omar Khayyam as well as a definitive edition of the poems of Hafez. Dr. Ghani also wrote a two-volume study of the history of mysticism in Islam and the historical background of the age of Hafez. He served briefly as minister of health and later education in various cabinets. In his role as a diplomat, Dr. Ghani enjoyed the trust of both Reza Shah and Mohammad Reza Shah. He was the leading member of a three-man delegation that Reza Shah sent to Egypt to propose marriage on behalf of his son to Princess Fawzieh. Ten years later, he was charged by Mohammad Reza Shah with the task of effecting a reconciliation, and failing that finding a suitable solution to their divorce. While serving as the Iranian ambassador to Egypt and later to Turkey, he developed close relations with the leadership of those countries as well as with the Western diplomats posted there. His dispatches from Cairo and Ankara are still used by the Iranian Foreign Ministry as models for young diplomats. He was a member of the Iranian delegation to the San Francisco conference in 1945 to create the UN. In November 1949, he accompanied the shah on his first visit to the U.S. at the invitation of President Truman, meeting the president and the future president Eisenhower. He became acquainted with many leading intellectuals and scientists of the time among them Albert Einstein, Ernest Laurence and Robert Oppenheimer.

Dr. Ghani died at the relatively young age of fifty-nine. Health problems in his last years seem to have darkened his outlook, but nothing could affect his unquenchable intellect. To give the world a vivid personal record of what he did and thought over the course of his lifetime was perhaps his greatest accomplishment of all.