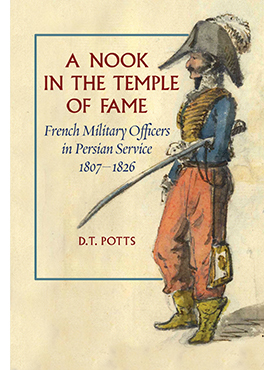 View Gallery
By D.T. Potts In Featured, History, and Non-Fiction

A Nook in the Temple of Fame: French Military Officers in Persian Service, 1807–1826

In the interests of exploiting Iran’s location and natural resources to launch a projected attack on British India, Napoleon sent a delegation of military advisers to Fath ‘Ali Shah. They were charged with designing and reinforcing fortifications, training cavalry and infantry to European standards, and establishing a center of artillery production. He also sent geographers to reconnoiter the country, documenting routes that might be used by French and Persian land forces in a planned but never fulfilled invasion of India.
The work of these officers has often been mentioned in passing but rarely has it been studied in detail. Although shifting geo-political forces ended the Napoleonic experiment, French involvement in the armed forces of ‘Abbas Mirza and his brother Mohammad ‘Ali Mirza continued. Despite the presence of English officers at Tabriz, the renegade Gaspard or J.B. Drouville headed to Iran, followed after the debacle at Waterloo by a handful of French officers who sought employment outside their native land.

This book is the first detailed study of the French officers who worked in Iran between 1807 and 1826, the impact they had, the innovations they introduced, their trials, and their tribulations. French military involvement in early Qajar Iran produced a host of stories deserving the attention of anyone with an interest in the seeds of military modernization in the Middle East, technology transfer in the 19th century, and the social, political, diplomatic, and military history of the Middle East in one of its most tumultuous phases.

D.T. Potts is Professor of Ancient Near Eastern Archaeology and History at the Institute for the Study of the Ancient World, New York University. His lifelong fascination with and love of Iranian history and archaeology began with his first visit to Iran in 1973 and has led him to work on a wide range of topics extending in time from prehistory to the modern era. He is the author of The Archaeology of Elam: Formation and Transformation of an Ancient Iranian State (Cambridge, 1999, 2nd ed. 2016) and Nomadism in Iran: From Antiquity to the Modern Era (Oxford, 2014). He was also the editor of The Oxford Handbook of Ancient Iran (Oxford, 2013) and Agreeable News from Persia: Iran in the Colonial and early Republican American Press, 1712-1848 (Springer, 2022).