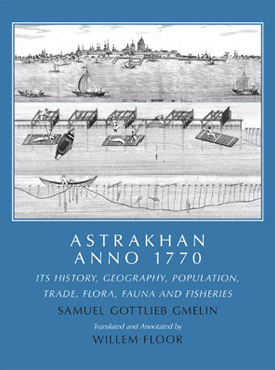 In 1770, Astrakhan, on the left bank of the Volga River close to where it discharges into the Caspian Sea, was Russia’s most important southern port through which all its trade with Iran and the Orient was conducted. Astrakhan had been a Tatar city until 1556 (when Ivan the Terrible conquered it), a fact reflected in the composition of its population in 1770: Tatars, Russians, Armenians, and Iranians.

Samuel Gottlieb Gmelin, a young member of the Russian Academy of Sciences, lived for almost a year in the city in 1770 and left a very detailed account of its geography, history, people, economy, flora, and fauna. Gmelin first describes the model colony of Sarepta established, by special agreement with the Russian government, by the German Moravian Brothers in 1765. Then he moves his narrative to Astrakhan, the Russian outpost on the Caspian Sea and provides us with a detailed description of its history, including that of Stenko Razin’s 1672 rebellion that devastated the port and its people.

Willem Floor has published numerous works of history as well as translations, which include: volumes 3 and 4 of Samuel Gottlieb Gmelin’s Travels Through Northern Persia 1770–1774; as well as Mirza Naqi Nasiri’s Titles and Emoluments in Safavid Iran: A Third Manual of Safavid Administration. He has also translated, in collaboration with Hasan Javadi, The Heavenly Rose-Garden: A History of Shirvan & Daghestan by Abbas Qoli Aqa Bakikhanov; and Evlya Chelebi’s Travels in Iran and the Caucasus, 1652 and 1655.