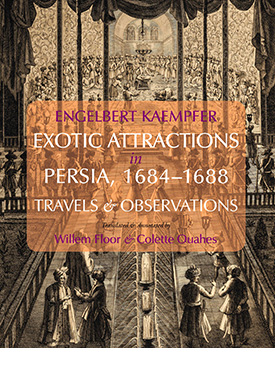 One of the most important sources on the history and culture of seventeenth-century Iran, Engelbert Kaempfer’s Amoenitatum Exoticarum was first published in Latin in 1712 but would not be translated for another two centuries, and then only partially, in German, in 1940. Exotic Attractions in Persia, 1684–1688: Travels & Observations is the first complete translation of the four books of this seminal work that concern Iran.

After studying philosophy and medicine in Prussia, Kaempfer went to Persia in 1684 as secretary to the Swedish ambassador, travelling via Moscow and the Volga to the Caspian and on to Isfahan. When the embassy returned to Sweden, Kaempfer stayed on, working as a physician for the Dutch East India Company in the Persian Gulf port of Bandar Abbas. It was on his return to Europe twelve years later, after voyaging further afield to the Far East, that he wrote an extensive account of his travels, in the form of the Amoenitatum Exoticarum.

Wide-ranging in its focus, the work is packed with absorbing detail. Book One provides us with a precise and systematic description of the principal political actors of the Safavid court, from the shah and prime minister and military, administrative, and religious leaders to the women of the harem and their eunuchs. We learn how the Persian state functioned in the hands of the staff of the royal court and urban and provincial officials. We are conducted around palaces and gardens and shown all the pageantry of the court, such as the ceremony involved in a royal audience or putting on a banquet. In Book Two, Kaempfer considers the theories of the day regarding the condition of the Caspian Sea and the oil fields of Baku – a few hundred years before oil’s worldwide commercialization; he gives the first detailed description, with illustrations, of Persepolis, and looks at the production of wine in Shiraz, which can be counted among the best in the world, in his view – equal to burgundy or champagne. In Book Three, he debunks the European notion that in the East there existed a form of vegetable lamb (borometz); gives us an analysis of a much sought-after medicine, mumia; and provides an entertaining account of how Persians used cannabis for pleasure. Book Four, meanwhile, is entirely devoted to the date palm, its botany, cultivation, and manifold uses.

Kaempfer brought an extraordinary level of objectivity and curiosity to his work, qualities that are reflected in Amoenitatum Exoticarum, making it a very reliable source of information. Rigorously scientific in his approach, he would not accept the authority of prior work on a subject unless he could verify it for himself, on site. He not only measured everything he saw but he also made precise drawings. Bringing alive for a modern audience the wealth of detail of the original work and its keen-eyed and scrupulous author, this new translation by Willem Floor and Collette Ouahes shines a spotlight on seventeenth-century Iran, providing a fascinating insight into the history and culture of the period.