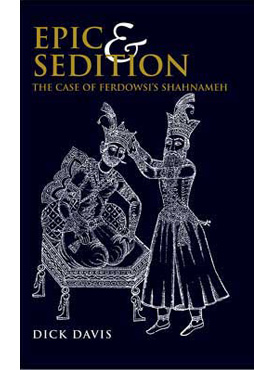 Epic and Sedition: The Case of Ferdowsi’s Shahnameh

Iran’s national epic, the Shahnameh of Ferdowsi, has traditionally been regarded by both Persians and Westerners as a poem celebrating the the central role of monarchy in Persian history. In this groundbreaking book, Dick Davis argues that the poem is far more than a patriotic chronicle of kingly deeds. Rather, it is a subtle and highly ambiguous discussion of authority, and far from being a celebration of monarchy, its most famous episodes and heroes amount to a radical critique of the institution. Davis demonstrates that the public world of kingly authority is shadowed in the poem by a series of tragic father-son relationships, and that in both the royal and familial spheres, authority figures are invariably presented as morally inferior to those whom they govern. The Shahnameh’s complex aesthetic structure and its tragic resolution of problems of authority and hierarchy make it an artistic artifact able to take its rightful place beside the major masterpieces of world literature.

“Davis explores the main themes of the Shahnameh with great insight and provides some convincing answers to these questions. In doing so, he rightly emphasizes the poet’s own dramatic conception of the work, thus rescuing it from the notion that it is simply a versified chronicle of the kings of Iran. Davis discusses complex interlocking themes cogently. The main issue emerges with great clarity and force.”

“Davis has succeeded in bringing alive the issues and the conflicts which inform the Shahnama in a study which will undoubtedly remain important for many years to come.”

—Journal of the Royal Asiatic Society

“Epic and Sedition is the best book on the Shahnameh to have appeared for many years, we recommend that all those concerned with literature and culture read it.”

“[Epic and Sedition] can be considered as the best book on the Shahnameh yet written, as an introduction/guide to the work, in its drawing of attention to which are the most significant narratives in the poem, and as a description of Ferdowsi’s poetic art.”

“Davis has been able to open a broad and effective perspective on the Shahnameh. With Epic and Sedition, Shahnameh studies have certainly made a great step forward.”

“The most original and best argued interpretation of Shahnameh that I have read in many years Very well written.”

It is perhaps best to lay one’s cards on the table at the outset, and the particular joker in my own hand is that I have spent at least as much of my adult life writing and translating poetry as I have writing prose about poetry. I mention this only because it gives a particular perspective to one’s reading of a poem: if a person spends time writing poems, or trying to verse equivalents in his own language for other people’s poems, it becomes very difficult to read poetry, from whatever time or culture, without being aware of the existence of a poet behind the text. You see how he has put the thing together, the decisions that have been made, the inclusions and implied exclusions; you sense the poet’s quickened interest at particular points-a tightening of the rhetoric or a sudden attention to psychological detail where there had been no such attention before alert you to the poet’s special interest in an episode, and so on. All this is true even when one reads a supposedly anonymous or folk poem, or something with the indeterminate status of the Homeric canon. At some point someone has made the artefact one confronts, no matter how indebted it may be to a tradition antecedent to it. As M. I. Finley has pertinently remarked on the problems of Homer’s contribution to the poems that bear his name, “Paradoxically, the greater the mass of accumulated materials, the greater the poet’s freedom, given a desire and the ability to exercise it. Through his unparalleled skill in choice of incidents and background formulas and in his own combinations, a Homer could create a world in his own image . . . ”

The devaluation of the rôle of the maker in epic material, which Finley is here objecting to, has found allies in much contemporary criticism which would seek to devalue the rôle of the maker in all genres of poetry, the crucial factors being no longer a poet’s mind but the Zeitgeist, cultural and economic realities, the nature of language, and strategies inherent in the craft of poetry itself. Zeitgeist, language, and craft are, however, brought together in a particular mind, or we have no poem, and that mind’s constitution must by any reading be crucial. My own stake in the case, as well as a sense that poets tend to be at least as intelligent as critics (most interesting criticism on poetry-criticism that has outlived the immediate generation in which it was produced-has been written by poets) makes me unwilling to concede to impersonal forces what the poet claims as his own domain. Or to put it another way, I believe that poets tend to know what they are doing and to do at least as much consciously as the age forces them to do unconsciously, or as their material dictates to them.

To take a specific instance from the poem in question, Ferdowsi’s Shahnameh, the hero, Rostam, as a young man performs a series of heroic labors, referred to as his “haft kh’an.” Much later in the poem another hero, with whom Rostam must do combat and whom he will eventually slay, also performs a parallel set of “haft kh’an.” The usual response to this (e.g., Nöldeke’s) is to say that we have here an example of the duplication of heroic material and its ascription to two different heroes, which is common in the development of folk material in many cultures. No doubt we do, and this is a perfectly plausible explanation of the origin of the existence of the two haft kh’an. But why did Ferdowsi include both in his poem? Sa’alebi, a historian who sticks so closely to Ferdowsi’s version of events that it is virtually certain that they used the same major source, omits Rostam’s haft kh’an and includes only those carried out by the later hero, Esfandyar. Why doesn’t Ferdowsi do this? Because he isn’t as intelligent as Sa’alebi and doesn’t see the lack of realism the parallel implies? Because he forgets that he has already told this story once? Neither explanation seems to me remotely possible; Sa’alebi omits Rostam’s haft kh’an because he is a historian interested in plausible history; Ferdowsi is not a historian but a poet, and he includes the two sets of haft kh’an for poetic reasons. He is creating a parallel between Rostam and Esfandyar. They are in a sense avatars of a similar heroic spirit. They are in another sense a symbolic father and son, and Ferdowsi is at great pains to underline their equivalence. Faced with the same material, êaÉalebi makes a historian’s choice, and Ferdowsi makes a poet’s choice, neither is simply at the mercy of his material but, as Finley puts it, is concerned to “create a world in his own image,” to render the world in a manner appropriate to his medium.

What this is leading up to saying is that my study concerns itself very largely with our sense of the poet as he appears in his poem, not with his material circumstances but with his mental life insofar as this is recoverable. That I believe that this mental life is to some extent recoverable is the impulse behind the writing of the present work. That the mental life of the maker of a poem is of interest to a student of the poem I take as axiomatic-from where else could the poem issue?

Umberto Eco, in a recent preface to a reissue of his early work The Aesthetics of Thomas Aquinas, deplores the faults of his early prose style: “a tendency to equate the readable with the unscientific, the headstrong insistence of a young scholar upon technical-sounding phrases instead of plain language, and on an overblown apparatus whose purpose, often enough, was merely to show that the writer had read everything he could on the subject.” I have tried hard to avoid these faults-no jargon, no obfuscation, a belief that it is possible to talk and write clearly and simply about complicated matters. To Eco’s castigation of his youthful prose style I would add another quotation, from Callimachus: “Mega biblion, mega kakon,” “A big book is a big nuisance.” A writer on Ferdowsi’s Shahnameh, one of the longest poems known to have been written (almost, if we except Daqiqi’s thousand or so lines) by one man, cannot be expected to go along with this completely, but certainly a big critical book is a big nuisance, and I have tried to keep this short