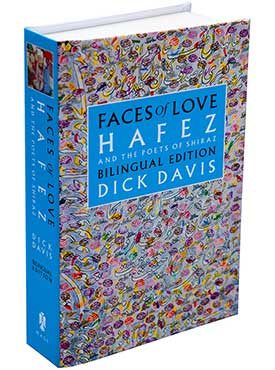 Faces of Love: Hafez and the Poets of Shiraz – Bilingual Edition

This bilingual edition of Faces of Love: Hafez and the Poets of Shiraz has the original Persian verses facing the English translations. The three Shirazi poets whose work is featured here, Hafez, Jahan Malek Khatun, and Obayd-e Zakani, lived at the same time (the mid fourteenth century), and certainly knew of one another – Obayd wrote at least two poems about Jahan Khatun, and Jahan Khatun quotes Hafez in one of her poems. It’s extremely likely that, during the 1340s and early 1350s at least, they also knew one another personally. The poetic life of the city during this period centered on the court of the ruling family, the Injus; Jahan Khatun was an Inju princess, while her uncle, Abu Es’haq, the head of the family and the ruler of the city, was a great patron of poets.

“Davis [is] widely acknowledged as the leading translator of Persian literature in our time…Faces of Love has made the Persian originals into real and moving English poems.”

“Davis has done something I’d thought impossible: given us an Englished Hafez whose verses retain an intimation of what all the fuss is about…this anthology is a revelation.”

“Radiant…Davis expertly elucidates the conventions these poets worked within and played against.”

—A. E. Stallings, The Times Literary Supplement Books of the Year

Among the qualities that distinguish his poetry and scholarship are exacting technical expertise and wide cultural sympathy—an ability to enter into distant cultural milieus both intellectually and emotionally. In choosing his volume of poems Belonging as a “Book of the Year” for 2006, The Economist praised it as “a profound and beautiful collection” that gave evidence of “a commitment to an ideal of civilized life shared by many cultures.” the Times Literary Supplement has called him “our finest translator of Persian poetry.” In 2009 Mage published a book of Dick Davis’s own poems about Iran: At Home and Far From Home: Poems on Iran and Persian Culture. His book about the Shahnameh, Epic and Sedition was published by Mage in paperback in 2006. His books of translations are: Borrowed Ware: Medieval Persian Epigrams (1998), The Shahnameh (2004); The Legend of Seyavash (2004); Rostam: Tales of Love and War from Persia’s Book of Kings (2007); Vis and Ramin(2008); Faces of Love: Hafez and the Poets of Shiraz (2012).