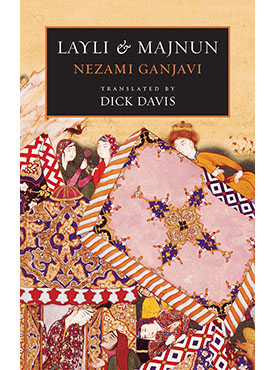 Excerpt From the Book
By Nezami Ganjavi Translated by Dick Davis In Featured and Poetry Tagged In 12th Century, Books by Dick Davis, Nezami, Romance, and spiritualism.

For its subtlety, inventiveness, and dramatic force, the verse of the twelfth-century Persian poet Nezami has been compared to that of Shakespeare, and in the same way that Shakespeare’s Romeo and Juliet has become the archetypal Western love story, so Nezami’s Layli and Majnun occupies an equally uncontested place as the iconic love story of the Middle East.

The works have many similarities besides their central status in their respective cultures: in both, the lovers are thwarted by their families’ opposition; in both, the heroine’s family chooses another husband for her; in both, the vehemence of the lovers’ emotion wreaks social havoc and leads to their deaths. But where Romeo and Juliet’s love is characterized by its precipitous speed, that of Layli and Majnun lasts a lifetime, and where Shakespeare gives us a blaze of incandescent adolescent passion, Nezami weaves a tale of prolonged absence, ascetic denial, and spiritual longing, as well as of man’s paradoxical relationship with the wilderness as the place where the amenities of civilization are replaced by the soul’s solitary confrontation with its own essential needs and nature.

Dick Davis is an accomplished poet and scholar; he is also the finest translator of Persian poetry. With Layli and Majnun, he brings Nezami’s classic to life for the first time in brilliant and moving English verse that captures all the extraordinary power and ingenuity of the original poem. Meanwhile, an introduction and copious explanatory notes shed a fascinating light on Nezami’s life and work, and the astonishing virtuosity of his poetic style, that help set the stage for the reader’s enjoyment of this tour de force of Persian literature.

– An excerpt from Majnun Goes to Layli’s Home and Sings There can be read here .

– Another excerpt from Layli and Majnun can be read here.