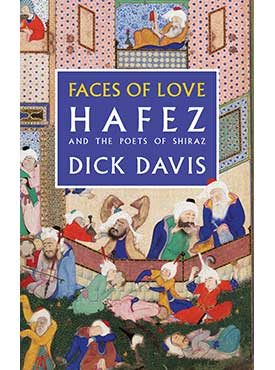 Faces of Love: Hafez and the Poets of Shiraz

A giant of world literature, an eloquent princess, a dissolute satirist – these are the three voices translated from fourteenth-century Persian by Dick Davis in Faces of Love. Together, they represent one of the most remarkable literary flowerings of any era. All three – Hafez, Jahan Malek Khatun, and Obayd-e Zakani – lived in Shiraz, a provincial capital in south-central Iran, and all drew support from arts-loving rulers at a time better known for invasions and political violence. Love was a frequent subject of their work: spiritual as well as secular, in varieties embracing every aspect of the human heart.

They could hardly have been more different. Hafez – destined to win fame throughout the world – wrote lyrical poetry that was subtle, elusive, and rich in ambiguity. Jahan – largely forgotten until recent decades – was a privileged princess who could evoke passion, longing and heartbreak with uncanny power. (As Davis says: “To have this extraordinary poet’s fascinating and often very beautiful poems emerge from six hundred years of virtual oblivion seems almost miraculous.”) Obayd – a satirist and truth-teller – celebrated every pleasure of the flesh in language of astonishing and occasionally obscene honesty.

In his introduction, Davis – himself a gifted poet as well as an acclaimed translator and scholar of Persian literature – describes the turbulent world of the three poets and recounts what is known of their lives. His scene-setting includes explanations of poetic conventions of the day: the rules of rhyming and meter, the stylized relationship between author and subject, and the way language sometimes hovers between male and female or between sacred and secular meanings. Detailed explanatory notes follow the poems, along with some personal reflections on the challenge of trying to catch the poetic genius of a culture distant in space and time. Dick Davis does it brilliantly: Faces of Love is a bridge that carries us to another age.

As a translator, an eminent scholar of Persian literature, and an acclaimed poet, Dick Davis has published more than 20 books. Educated in England, he lived in Iran for eight years. He has taught at the University of California and Ohio State University. His recent translations include Ferdowsi’s Shahnameh: the Persian Book of Kings, chosen as one of the “ten best books of 2006” by the Washington Post.

Persian text of the poems in Faces of Love: Hafez and the Poets of Shiraz