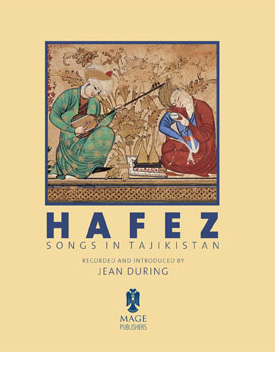 View Gallery
By Recorded and Introduced by Jean During, Hafez couplets Translated by Dick Davis In Backlist and Poetry Tagged In Art, Hafez, Music, Song, and Tajikistan.

In this CD collection, the renowned musicologist Jean During gathers a dozen songs, mostly from Tajikistan, composed around the poetry of the Persian poet Hafez. In Iran, Hafez’s poetry is always sung in the free classical style, and rarely in songs with measured rhythms. In the traditions of Transoxiana, on the other hand, almost all classical and semi-classical songs use poems by major and minor poets, ancient and modern. Here, creativity is expressed not through improvisation but in traditional arrangements and compositions, and the result is music of great quality and originality.

Hafez in Tajikistan,
by Jean During

This CD gathers a dozen songs; what they all have in common is that they were collected in Tajikistan and were composed around poems by the Persian poet Hafez.
In Iran, Hafez’s poetry is always sung in the free classical and non-measured style, and rarely in that of a song (tasnif, tarane) with measured rhythm. (There are, however, a few exceptions, such as the tasnif of the poem Del miravad ze dastam or Tore banafshe) Hafez is rarely sung in a measured genre, essentially because the “modern” Persian tasnif is almost always composed with contemporary poems that easily adapt to the melody and rhythm. It is much more difficult to impose complex music and poetry with a regular meter (bahr) upon each other. Therefore, paradoxically, classical Persian songs are rarely set to classical poems.

In the traditions of Transoxiana, on the other hand, almost all classical and semi-classical songs use poems by great authors, ancient and modern, Uzbek and Chagatai (such as Navai, Fuzuli, Hoveyda, Mashrap), and Persian (Rudaki, Sa’di, Hafez, Khayyam, Khojandi, Bidel, Amir Khosrow, Layiq, etc.). There also exist, two traditions of free and non-measured song, comparable to the Persian style (radif); one is Uzbek and learned (katta ashula, set to Uzbek poems), the other Tajik and popular (falak, set to nonclassical verse). In both genres, the freedom to improvise is rather limited, and the music of Transoxiana, as well as that of the Uigur, is generally composed of vocal and instrumental forms that are firmly established. Creativity is not expressed through improvisation but in arrangement and composition. The result is an abundance of works of quality that can be very original while conforming to the traditional style.

In this CD collection, the renowned musicologist Jean During gathers a dozen songs, mostly from Tajikistan, composed around the poetry of the Persian poet Hafez. In Iran, Hafez’s poetry is always sung in the free classical style, and rarely in songs with measured rhythms. In the traditions of Transoxiana, on the other hand, almost all classical and semi-classical songs use poems by major and minor poets, ancient and modern. Here, creativity is expressed not through improvisation but in traditional arrangements and compositions, and the result is music of great quality and originality.

1. abdollah nazriev / 5:54
“Bia ta gol barafshanim-o mey dar saghar andazim
Falakra saqf beshkafim o tarh-e now barandazim”
Come, so that we can scatter flowers, and fill the glass with wine,
And split the ceiling of the skies and try a new design

LISTEN TO A SAMPLE

5. hasan sayid qasimov / 4:57
“Gol dar bar o mey dar kaf, ma’shuq be kam ast
Soltan-e jahanam be chonin ruz gholam ast”
With roses in my arms, a wineglass in my hand, and my belovèd near me –
On such a day, the king of all the world would be my slave and fear me

6. barno ishakova / 10:49
“Saba be lotf begu an ghazal-e ra‘na ra
Ke sar be kuh-o biaban to dade’i ma ra”
O morning breeze, be gracious now and sing that lovely song for me,
“You’ve made me wander in the mountains and desert wastes incessantly”

LISTEN TO A SAMPLE

As well as quatrains and cinquains of a popular strain, the bards of the Pamir chant classical poetry based on a great variety of meters. The minor poets rub shoulders with Hafez and Sa’di, two of the greatest Persian poets of all time. It is not a matter of pinning eloquent words to popular melodies – though that may happen – but, rather, of composing from the text. Not every male or female singer is a hafez. A true hafez must have a personal style and, in order to fashion that style, must compose; in order to compose, a hafez must know the rules of poetry (namely rules of meter) and derive inspiration from both the poem’s form and content. This implies a certain foundation in cultural, philosophical, religious, and literary traditions, as well as a particular sensibility. The famous bard Davlatmand Kholov explains that the hafez must dive and swim into the rhythm (bahr) of the poem, that the melody must emanate from the pain of the poem (az dard-e ghazal), from the meaning of the text (ma’ni-e matn). The Tajik hafez may be considered the heir to the Parthian gosan, and to legendary musicians and poets such as Barbad and Rudaki. But while the hafez sing for a popular audience –  inasmuch as they touch every kind of listener – it is necessary to appreciate the nuance of their expertise and their degree of professionalism.

The selections presented here, chosen for their authenticity and quality, have been drawn from a dozen hours of recordings collected in different cities and towns in Tajikistan between 1990 and 1992. One song comes from recordings by National Tajik Radio.

Tracks 1 through 5 are representative of the art of the professional Pamir hafez. Tracks 6 through 10 belong to the shashmaqam genre, or derive from it. The others stem from more popular traditions. The last song does not come from Tajikistan, but from a Baluchi Sufi repertoire.

1.and 3. abdollah nazriev is one of the great Tajik minstrels. Sixty-two years old at the time of this recording, he has behind him a long career as a singer and composer. Nazriev has trained many artists who have become famous, and he taught at the Conservatory of Dushanbe. He sings classical poems to tunes that are either ancient or of his own composition, accompanied by dotar or setar lutes or the ghijak fiddle, and generally in unison with his son Ismail, who is a teacher of philology and a bard in his own right. This first song is taken from Nasrullahi, of maqam Buzruk.

2. abdonazar hasanov, of Uzbek origin, was trained in shashmaqam and in classical chant at the Politechnicum of Marghilan, in Uzbek Fergana. His “weeping” style (yighlagich oslub) derives from the ancient school of classical bards, whose representatives are very rare.

4. shunqar adinebeg, here recorded three years before his disappearance in 1995, when he ceased performing professionally, was the pupil of Aka Sharik Jurayev, the most famous bard of the twentieth century. Shunqar recounts that, even during the Soviet period, Sufis would often gather in a mosque and invite him to chant mystical or sapiential poems (pand o nasihat) by Jami, Bidel, and Rumi. This poem could be the work of a poet other than Hafez, with Hafez’s name placed in the last couplet. Or, as was often done with the poetry of Sa’di and Rumi, it could be a fine ghazal by a lesser poet, who wanted to insure the passing the poem to posterity by attaching to it the name of a great poet.

5. hasan sayid qasimov, born in 1929, learned his art beside his father and Gada Yarov. He sings songs that only he knows, and composes according to classical meter. Living in the district of Vakhio, he is sometimes invited to sing at weddings, where he always performs alone, sometimes with a dayra tambourine. He works as a professor and school headmaster, and defines himself as an “amateur” musician (eshqi) in the true sense of the word.

6. barno ishakova was the greatest Central Asian classical singer of her generation. Born in 1927, in Tashkent, to a Jewish family from Samarqand, she grew up in a musical milieu most propitious to the development of her innate talent. Studying with the masters, she not only became an expert of the great classical repertoire, but she also elaborated her own style.  We recorded her in June 1992, right before her permanent departure for Israel, where she fell ill and passed away a few years later. It was probably her last concert. She is accompanied by the tanbur, the ghijak, the dotar, and percussion.

7. bay mohammad niazi is a renowned hafez from Khojand. He knows the shashmaqam well, and upon this classical foundation he has composed about two hundred songs of the highest quality in his forty-year career. His composition “technique” is closely linked to poetry and the poetic sensibility:
“How do I compose? I read a poem, then, depending on its meaning, I knot a melody around it…. It happens that I find a poem whose meaning awakens something in me, and then I compose a song. I have never gone to a lot of trouble; it comes by itself, it’s a gift from God.… I sing with the poem first. The book stays open, I play, and I sing. Then it perfects itself.… When the form of the song is complete, I sing it with the instrument. At that point, other things keep on coming. Then I record it and finally I sing it in public.” Here he sings while playing the Azerbaijani tar, with dotar accompaniment by S. Khudaberdiev.

8. bay mohammad niazi, here accompanied by the orchestra of Tajik Radio, performs a saqi-name (“cup-bearer poem”) belonging to the repertoire of the shashmaqam.

9. sanavar londokov, born in 1929, lives in the village of Raw, in the Vanj region alongside the Panj River, across from Afghanistan, where he works as a truck driver. Here, he plays the setar and sings with his brother, in a style typical of this region, in which one can perceive some affinities with the style of Badakhshan.

10. abdoljalil hashimov is a semi-classical singer who is well regarded in Dushanbe, and who sings in Uzbek as well as in Tajik, accompanied on the Azerbaijani tar. He has received the distinction of Artist of the People. Here he sings a piece from the Bukharian shashmaqam genre, accompanied on the dotar by S. Khudaberdiev, during the course of a toy, or wedding. This poem is attributed to Hafez and is an example of a “drinking song” couplet. It is not included in many of the official divans of Hafez.

11. The sphere of influence of Hafez’s poetry outside Iran greatly exceeds Tajikistan and Afghanistan. Hafez is also sung in Pakistan and in India, and certain Sufi brotherhoods in Bosnia have integrated some of his poems into their repertoire. This track is a Sufi song belonging to an altogether different tradition, that of the Cheshti brotherhood of Iranian Baluchistan, whose roots are found further east, in northern Pakistan. abdorauf sahebi, who sings and plays the rabab (with tanburag accompaniment), was the descendant of a family of Sufi sheikhs of the Cheshti order living in Dehak, in a hamlet called Nahich (literally, “not-nothing”). He directed musical sessions for the followers of the brotherhood, singing this ghazal to melodies that, for the Baluchi themselves, are completely atypical. The music, in fact, comes out of a Brahouie tradition, whose source is located in north-central Pakistan. We recorded Abdorauf several times between 1979 and 1983.

12. Female singers have an important place in the life of both classical and popular Tajik music. Singing tunes in the shashmaqam tradition as a duet is common and very popular. This tradition is what the two female singers here – nasiba uzakova, a student of Bay Mohammad Niazi; and arifa-nisa ghafur, a disciple of Jurabek Nabiev, Niazi, and Jurabek Muradov – are experimenting with. The saqi-name-ye Sawt-e Nava, in 2/4, is taken from the suite of Sawt-e Nava. The accompanists are Saydullah Ubatdyllaev, on ghijak; Bayat Haraqulov, rabab-e qashqari; and Abduvali Ikramov, dayra.