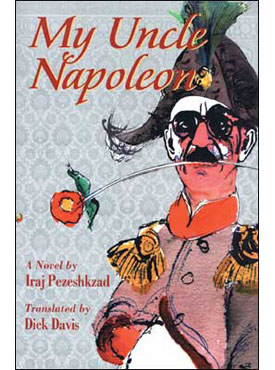 My Uncle Napoleon: A Comic Novel

Available in Hardcover and Paperback or for the Kindle & iPad, and Audio Book

“The existence in Persian literature of a full-scale, abundantly inventive comic novel that involves a gallery of varied and highly memorable characters, not to mention scenes of hilarious farcical mayhem, may come as a surprise to a Western audience used to associating Iran with all that is in their eyes dour, dire and dreadful.” (From the Preface)

Set in a garden in Tehran in the early 1940s, where three families live under the tyranny of a paranoid patriarch, My Uncle Napoleon is a rich, comic and brilliantly on-target send-up of Iranian society. The novel is, at its core, a love story. But the young narrator’s delicate and pure love for his cousin Layli is constantly jeopardized by an unforgettable cast of family members and the hilarious mayhem of their intrigues and machinations. It is also a social satire, a lampooning of the widespread Iranian belief that foreigners (particularly the British) are responsible for events that occurs in Iran. But most of all it is a very enjoyable, often side-splitting read that you wish did not have to end. First published in Iran in the early 1970s, the novel became an all-time best-seller. In 1976 it was turned into a television series and immediately captured the imagination of the whole nation-its story became a cultural reference point and its characters national icons. Dick Davis’ superb English translation has not only captured the uproarious humor of the original but has also caught the delicate, underlying vibrancy of the Persian.

“An uproarious and endearing Iranian novel… one of the most entertaining books we’re likely to see this year.”
– – Kirkus Reviews

“A giddily uproarious mixture of farce and slapstick.”
– – The Atlantic Monthly

“My Uncle Napoleon is a surprising novel, a raunchy, irreverent, hilarious farce wrapped around a core of quiet sorrow.”
– – The Washington Post

“It is so surely told, so funny, true, and ultimately heart-rending, it’s absolutely clear why My Uncle Napoleon is loved in its homeland.”
– – The Baltimore Sun

“Readers can gain a more balanced impression of Iran from perusing this novel, which looks at life from the kind of humorous perspective few Westerners may associate with the current regime in that country.”
– – Christian Science Monitor

“The farcical plot dashes along at a rapid pace and there is never a dull stretch. In this English version, much of the reader’s enjoyment comes from the outstanding quality of the translation.”
– – Choice

“My Uncle Napoleon gives the reader an amusing, satirical picture of life among the privileged and their servants in Tehran at the beginning of World War II.”
– – The Washington Times

“The translation is so sensitive to the author’s tone and to the levels of language used by the characters that the Western reader, unfamiliar with Iran, needs only a minimum of help to enjoy and appreciate both the comic and serious aspects of the book.”
– – World Literture Review

One hot summer day, to be precise, one Friday the thirteenth of August, at about a quarter to three in the afternoon, I fell in love. The bitterness and longing I’ve been through since have often made me wonder whether if it had been the twelfth or the fourteenth of August things would have turned out differently.

That day, as on every day, they had compelled us-meaning me and my sister-by force and threats and a few golden promises for the evening to go into the cellar in order to sleep. In the savage heat of Tehran an afternoon siesta was compulsory for all the children. But on that day, as on every other afternoon, we were just waiting for my father to fall asleep so that we could go into the yard to play. When my father’s snores became audible I stuck my head out from under the coverlet and glanced at the clock on the wall. It was half past two in the afternoon. In waiting for my father to go off, my poor little sister had fallen asleep herself. I’d no choice but to leave her and I tiptoed out alone.

Layli, my uncle’s daughter, and her little brother had been waiting in the main garden for us for half an hour. Our two houses had been built within one big enclosure and there was no wall between them. As on every day, we settled down quietly to our games and conversation in the shade of a big walnut tree. And then I happened to catch Layli’s eye. A pair of wide black eyes looked back at me. I couldn’t tear my gaze away from hers. I’ve no idea how long we’d been staring at each other when suddenly my mother appeared standing over us with a little multi-thonged whip in her hand. Layli and her brother ran off to their house and my mother drove me into the cellar and under the coverlet, threatening me as she did so. Before my head was completely hidden under the coverlet I looked across at the clock on the wall; it was ten to three in the afternoon. Before she in turn put her head under the coverlet my mother said, “Thank God your uncle didn’t wake up, because if he had, he’d have torn you all to pieces.”

My mother was right. Dear Uncle (as we called him) was very particular about the orders he gave. He’d given an order that before five o’clock in the afternoon the children weren’t so much as to breathe. Within the four walls of that garden it wasn’t only we children who had learned what not sleeping in the afternoon and making a noise during Dear Uncle’s siesta meant; the crows and pigeons appeared in the garden much less often because Dear Uncle had taken a hunting rifle to them a few times and effected a general slaughter. The street vendors of our area didn’t go through our street, which was named after Dear Uncle, till five o’clock, because three or four times the man who came by on his donkey selling melons and onions had been slapped by Dear Uncle.

But that day my brain was working overtime and the name of Dear Uncle didn’t put me in mind of his rages and bad temper. I couldn’t get free of the memory of Layli’s eyes and of her gaze even for a moment, and no matter how much I tossed and turned and how much I tried to think of something else, I saw her black eyes, brighter than if she were really there in front of me.

That night, underneath the mosquito net, Layli’s eyes came after me once more. I hadn’t seen her again that evening, but her eyes and her beguiling gaze were there.

I don’t know how much time passed. Suddenly a weird thought seized my whole brain, “God forbid, I’ve fallen in love with Layli!”

Iraj Pezeshkzad was born in Tehran in 1928, and educated in Iran and France where he received his degree in Law. He served as a judge in the Iranian Judiciary for five years prior to joining the Iranian Foreign Service. He began writing in the early 1950s by translating the works of Voltaire and Molière into Persian and by writing short stories for magazines. His novels include Haji Mam-ja’far in Paris, and Mashalah Khan in the Court of Haroun al-Rashid. He has also written several plays and various articles on the Iranian Constitutional Revolution of 1905, the French Revolution, and the Russian Revolution. He is currently working as a journalist.