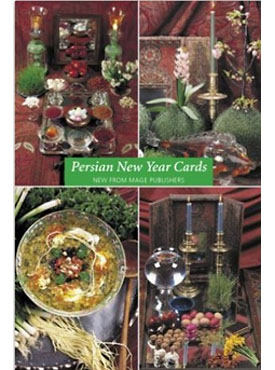 In harmony with the rebirth of nature, the two-week Persian New Year celebration, or Nowruz, always begins on the first day of spring marked by the vernal equinox, or Tahvil. On that day–which may occur on March 20, 21, or 22–the sun crosses the celestial equator. Nowruz ceremonies consist of a series of symbolic actions dating back to ancient times, including:

• Cleaning of the environment, cleansing of the self, confession of sins, the exorcising of devils, or divs, from the house and the community.

• Dowsing and re-lighting the fires.

• Processions to borders, seas, and rivers.

• Disruption of the normal order of things with boisterous parties.

A few weeks before the New Year, Iranians thoroughly clean and rearrange their homes. They make or buy new clothes, bake pastries and germinate seeds as signs of renewal. Troubadours, called Hadji Firuz or heralds of rebirth, disguised with makeup and wearing red satin outfits, sing and dance through the streets with tambourines, kettle drums, and trumpets to spread good cheer and the news of the coming New Year. The celebration of renewal is attributed to the Sumerian god of sacrifice, Domuzi, who was killed at the end of each year and reborn at the beginning of the new year. The Hadji Firuz’s disguised face represents his return from the world of the dead, his red costume symbolizes the blood and tragic fate of the legendary Prince Siavush and the rebirth of the god of sacrifice, while his happiness and singing represent his joy at being reborn.

In every Persian household a special cover is spread onto a carpet or on a table. This ceremonial setting is called sofreh-ye haft-sinn (literally “seven dishes’ setting,” each one beginning with the Persian letter sinn). The number seven has been sacred in Iran since antiquity, and the seven dishes stand for the seven angelic heralds of life-rebirth, health, happiness, prosperity, joy, patience, and beauty. They include: sabzeh, germinated sprouts; samanu, a pudding of wheat sprouts; sib, apple; senjed, the sweet, dry fruit of the lotus tree; seer, garlic; somaq, sumac; serkeh, vinegar.

To reconfirm the hopes and wishes expressed by the traditional foods, other elements and symbols are also placed on the sofreh. Books of tradition and wisdom are laid out: usually a copy of the holy Koran; and/or a divan of the poems of Hafez. A few coins and a basket of painted eggs are also placed on the sofreh. A Seville orange floating in a bowl of water represents the earth floating in space, and a goldfish in a bowl of water represents life and the end of the astral year associated with the constellation Pisces. A flask of rose water, known for its magical cleansing power, is also included on the sofreh. Nearby is a brazier for burning wild rue, a sacred herb whose smoldering fumes are said to ward off evil spirits. A pot of flowering hyacinth or narcissus is also set on the sofreh. On either side of a mirror are two candelabra. The mirror represents the images and reflections of Creation as we celebrate anew the ancient Persian traditions and beliefs that creation took place on the first day of spring, or Nowruz.

On the eve of the last Wednesday of the year (Shab-e chahar shanbeh sury, literally “the eve of Red Wednesday” or “the eve of celebration”), bonfires are lit in public places and people leap over the flames, shouting, “Sorkhi-e to az man o zardi-e man az to!” (Give me your beautiful red color and take back my sickly pallor!). With the help of fire and light, symbols of good, celebrants pass through this unlucky night-the End of the Year-and into the arrival of spring’s longer days. Tradition holds that the living are visited by the spirits of their ancestors on the last days of the year. Many people, especially children, wrap themselves in shrouds to symbolically reenact the visits. By the light of the bonfire, they run through the streets, banging on pots and pans with spoons and knocking on doors to ask for treats. This ritual is called qashogh-zany and reenacts the beating out of the last unlucky Wednesday of the year.

A few hours prior to the transition to the New Year, family and friends sit around the sofreh-ye haft-sinn. Everyone sings traditional songs, and poems of Hafez and verses from the Koran are recited. Exactly at the moment of the equinox, the oldest person present begins the well-wishing by standing up and giving out sweets, pastries, coins, and hugs. Calm, happiness, sweetness, and perfumed odors are very important on this day of rebirth, since the mood on this day is said to continue throughout the year. An old saying goes, “Good thought, good word, good deed-to the year end, happy indeed.”

According to the ancients, each of the 12 constellations in the zodiac governed one of the months of the year, and each would rule the earth for a thousand years, after which the sky and the earth would collapse into each other. The Nowruz celebrations, therefore, lasted 12 days, plus a 13th day (representing the time of chaos) celebrated by going outdoors, putting order aside and having parties. On this thirteenth day, called Sizdeh-bedar or outdoor thirteen, entire families leave their homes to carry trays of sprouted seeds in a procession to go picnic in a cool, grassy place. Far from home, they throw the sprouts into the water, which is thought to exorcise the divs and evil eyes from the house and the household. There is much singing, dancing, eating, and drinking. With this, the Nowruz celebrations are completed.

The traditional menu for the Nowruz gathering on the day of the equinox usually includes: