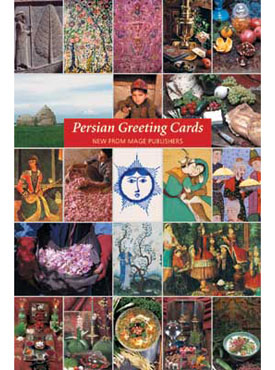 About the Set of Cards

The set comes with twenty-one cards, each with its own envelope, new from Mage, for holidays, birthdays, invitations, thank-yous, or any occasion when you’d like to send a card. Each card features a full-color cover image and a short story or greeting on the inside and/or back cover. There is also room to inscribe your personal message. Cards which feature a Persian dish also include a recipe inside.

For Iranians, Khorshid Khanum, or the “Sun Lady,” represents a stylized image of beauty. It is seen everywhere, even today, when the authorized face of feminine loveliness is an unadorned triangle framed by a chador.

Some have said the Sun Lady has pre-Islamic Zoroastrian origins, others that she came from Turkic Central Asia. The ultimate puzzle is how she came to be female at all, as in almost all mythologies the sun is male. Zoroastrian origins have been claimed for a series of embroideries of Khorshid Khanum found in the Yazd area.

Most historians believe Khorshid Khanum is not a particularly ancient creation, though there are plenty of old stories about her. The historian Hamid Nayernouri recounts a delightful story about a thirteenth-century Seljuk king, Ghiaseddin Keykhosrow, who fell madly in love with a Georgian princess and decided to have her face stamped on the currency. His devout Muslim entourage thought this was inappropriate, not to say scandalous. They insisted that her likeness should be combined with a lion and made to look like the sun so as to imply that the image was purely an astrological reference to the sun rising in Leo, the fifth sign of the Zodiac.

The scholar Afsaneh Najmabadi insists that the image reached its zenith in the nineteenth century, when it was generally paired with a lion. The symbol of the Lion and the Sun was made the official emblem of Iran in 1836, at a time when the Qajars were busily inventing a glorious past for their recently established dynasty. Around the time when women were ordered to abandon the veil, in 1936, a royal decree officially erased the Lady’s “eyes, eyebrows and hair.” As real women became more publicly visible, the symbolic woman of the national emblem disappeared.

In the latter half of the twentieth century, Khorshid Khanum made a massive comeback. She is one of the most popular marketing symbols in Iran today. It is a supreme irony that while the official image of Iranian womanhood today has been restricted to a practically faceless triangle in a black frame, Khorshid Khanoum–plump, curly-haired and sexy–beams down benignly and silently mocks.

— From Inside Iran: Women’s Lives by Jane Howard