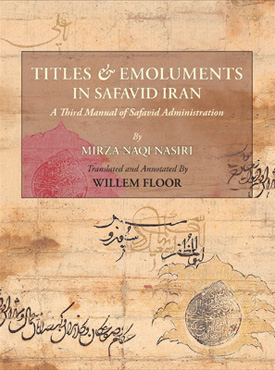 Titles and Emoluments in Safavid Iran: A Third Manual of Safavid Administration

Titles and Emoluments in Safavid Iran: A Third Manual of Safavid Administration contains unique and important information on offices, ethnic attitudes and administrative developments in Iran’s Safavid government (1495–1720). It provides the official honorific title for each official (and the variations thereof), which show the importance of these titles in the intricate structure of social and political standing among the power elite. The commentary’s long database of all known administrative jurisdictions with names and dates of each of its governors gives us a more nuanced understanding of how the Safavid administration functioned, not only at the central level but also at the provincial one. This, together with a detailed index, allows the reader to find the names of individual governors and follow their careers.

Titles and Emoluments in Safavid Iran facilitates the analysis of power relations between the central and tribal interests as well as other groups, and the changes therein over time. It is an essential historical resource for all those interested in Iran’s Safavid era.