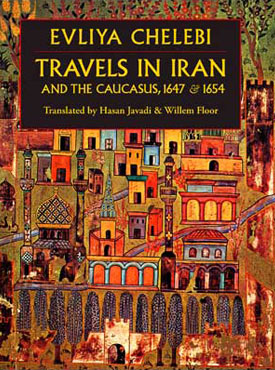 Travels in Iran and the Caucasus is a stimulating and informative account of an Ottoman administrator’s missions to the region in the mid-seventeenth century. Evliya Chelebi’s travelogue is not simply a diplomatic report, but rather a fascinating exploration of the religious, ethnic, artistic, and even culinary peculiarities of the region. In addition, it offers a fresh perspective on relations between the Ottomans and the Safavids during a period of relative calm in an otherwise stormy relationship. For the first time, the Iranian and Caucus sections of Chelebi’s Siyahat-nameh have been translated from the original Turkish manuscript into English in their most complete form. As such, this book is a unique resource not only for scholars of Safavid Iran but also for those interested in the seventeenth century Middle East in general.

Evliya Chelebi was born in Istanbul in 1611. He was renowned for his recitations of the Koran and was invited by the Ottoman sultan to study calligraphy, poetry, and music at the palace school. Chelebi traveled extensively on behalf of various patrons. His travels took him throughout the Ottoman Empire, Iran, and Europe. After settling in Cairo in 1671/72, he began recording his travels in a total of ten volumes, which were still unfinished at the time of his death in 1684/85.