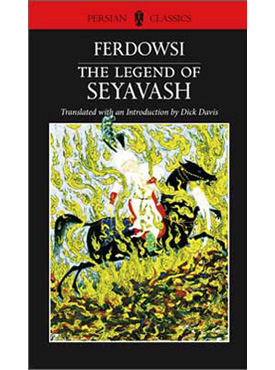 The Legend of Seyavash comes from the middle section of the Shahnameh, Iran’s national epic by the poet Ferdowsi (c 940–c 1020) and presents a world of warfare, military prowess, romance, guile, and fierce tribal loyalty. Ferdowsi’s epic style and mastery of poetic organization, however, is matched by the psychological and ethical depth of his insight and his concerns for the primal struggle between good and evil, and man’s continual attempt to create justice and civilized order out of the chaos of human greed and cruelty. The Legend of Seyavash begins with the stuff of romance—a foreign girl of royal blood, found as a fugitive and introduced into the king’s harem, gives birth to a son, Seyavash, who is raised not by his father the king, but by the great hero Rostam. On Seyavash’s return home Sudabeh, his step-mother, attempts to seduce him, and when he spurns her she accuses him of having attempted to rape her. He undergoes a trial by fire to prove his innocence, and goes on to battle successfully against Iran’s rival, Turan, concluding a truce with the Turanian king, Afrasyab, on amicable terms. But Seyavash’s father, Kavus, insists that Seyavash surrender the Turanian hostages to slaughter, and with a conflicted conscience and no one to turn to, Seyavash flees to the Turanian court, where he is first given safe harbor, but is once again abandoned. Dick Davis has made a masterful translation of the poem and written a penetrating introduction.