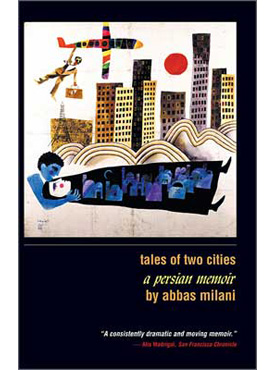 Tales of Two Cities: A Persian Memoir is an engrossing, cross-cultural memoir of revolution and exile. It is the story of a fifteen year-old Persian boy sent for his eduction from an old-world, pre-oil boom Tehran, to the new-world, avant-garde San Francisco of the 1960s. Abbas Milani richly chronicles his education, politicization, return to Iran, disillusionment and eventual exile. Interwoven with the brisk narrative is a loving account of the traditional Iran of the author’s childhood; a searing memoir of a lost generation of Iranians torn apart by revolution and exile, a graphic portrait of the author’s time in the shah’s jail and of his cellmates, the mullahs who would soon emerge as the new leaders of the Islamic Republic. Tales of Two Cities: A Persian Memoir is not only the odyssey of one intellectual doomed to exile, but also a message of hope and ultimately salvation for the increasing number of people forced to leave their homeland and settle in America.

“An exceptional, emotionally blooded memoir. . . . That this [memoir] turns out to be a breathtaking example of the quiet, selfless gorgeousness of the memorist’s art is the reader’s good fortune. Milani offers classically ordered writing about character, place, and time. . . . The entire memoir is infused with the perversity, nightmarishness, and occasional strange sweetness of growing up amid religious rule and ritual. This is a tale on whose every word readers will hang.”
– – Kirkus Reviews

:”A great deal of information about Iran is covered in this volume, from the Shi’ite clerics’ obsession with hierarchy to Iranians’ favorite conspiracy theories explaining the forces behind Iran’s Islamic revolution.”
– – Library Journal

“Milani paints powerful portraits of life under siege. . . . An effective and powerful blend of the personal and political, Milani’s memoirs try to create cohesion and meaning from his own fragmented past and Iran’s recent tragic history.”
– – The Vancouver Sun

“[Milani’s] reflections on revolution, in general and on the Iranian revolution in particular, are very impressive.”
– – The Oregonian

“A fascinating autobiography interwoven with the cultures, religions, philosophies and politics of Iran. . . . More can be learned about the recent history and politics of Iran and its Islamic Revolution from this personal memoir than from any history book or news report.”
– – Small Press Magazine

“Abbas Milani is a sharp and thoughtful observer of the political process and a remarkably sensitive chronicler of the human dimensions of Iran’s excruciating contemporary history. Tales of Two Cities is a significant and deeply moving achievement.”
– – Stephen Greenblatt, Professor of Literature, UC-Berkeley

“The reader will not find here deep insights into the high politics of Iran, but rather a wealth of insights into Iranian society and culture. Along the way Milani also makes acute observations about American society.”
– – Foreign Affairs, William B. Quandt