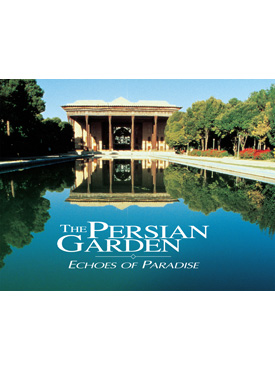 The Persian Garden: Echoes of Paradise

For more than three thousand years, the Persian garden has been a focus of Iran’s national imagination, influencing its art, literature, and even religion. The Persian garden’s inspirational role has, however, extended far beyond the land of its origin; its precepts have exerted a profound influence on garden design around the world. The Persian Garden: Echoes of Paradise chronicles the history of the Persian garden, from the magnificent sanctuaries and hunting parks of fifth-century b.c. Persepolis to the magical nightingale gardens of nineteenth-century Tehran. All were seen as a kind of earthly paradise (the English word paradise has its roots in the old Persian word pairi-daeza meaning a “walled space”). To an astonishing extent, that vision seems justified.

This book was meticulously researched and created over a period of six years in, Paris, Tehran and Washington by photographer, Mehdi Khonsari and architect Minouch Yavari, together with the renowned Persian architect and architectural historian Reza Moghtader. It explains the philosophy behind Persian garden design and offers an authoritative account of its development-introducing new historical material in the process. This extraordinary story is enhanced by vivid descriptions of Persian gardens as seen through the eyes of travelers to Iran during the past five hundred years. Over 240 illustrations in full color, complement the text. They include magnificent color photographs, old plates and engravings, as well as exquisite architectural renderings and plans of the sites and the gardens. A selection of the finest Persian garden-carpets, textiles, miniature paintings, stone reliefs, painted tiles, pottery, and poetry, augment the reader’s experience of an ancient art form that for centuries has sought to meld the physical and the spiritual

“The authors put the rather (to Western eyes) rectilinear gardens into context of surrounding landscape, buildings and the crucial subtle interactions of the shade, scent and color of plants and the all-important sound and sight of water.”
– – Publisher’s Weekly

The Rise and Fall of Ctesiphon

The Radiance of Persian Art

The Mahan Garden and the Qanats

The Gardens of the Great Kings

From the Sasanian Paradise to the Islamic Eden

From Shiraz to Samarkand & Agra

From the water of immortality to the legendary source of Fin

From the plane-trees of Tehran to the cypresses of Shiraz,
including Tabriz, Tabas, Yazd and Damghan

The Garden, a source of inspiration

Influence of the elements of gardens on other arts

Plants and Trees of Iran

Mehdi Khonsari was born in Tehran. He studied photography at the School of Visual Arts in New York. In 1986 he co-authored with his wife, Minouch Yavari, Espace Persan, a book on traditional architecture in Iran. He also co-authored The Persian Bazaar: Veiled Space of Desire.

M. Reza Moghtader was born in Tehran in 1931 and received his architecture degree in Paris in 1956. From 1958 to 1981 he practiced as an architect in Iran where some of his designs include: the Master Plan for the City of Tabriz, The Shiraz University Complex, and The Tehran University Faculties of Theology and Economic Science. Since 1981 he has been living in Paris where he researches and practices architecture.

Minouch Yavari was born in Tehran. She received her architecture degree in Paris and has worked as an architect since 1984 in Tehran, and then later in France. In 1986 she co-authored with her husband, Mehdi Khansari, Espace Persan, a book on traditional architecture in Iran. She also co-authored The Persian Bazaar: Veiled Space of Desire.