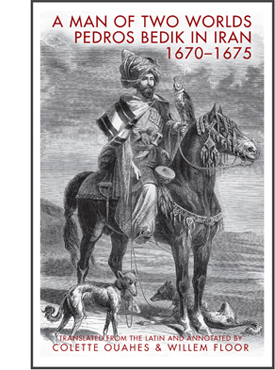 Throughout history, many an ambitious diplomatic initiative has slipped into obscurity, but few have been so thoroughly forgotten as the efforts of a young man named Pedros Bedik to foster an alliance between two great seventeenth century powers, Persia and the Holy Roman Empire, against the mighty Ottoman Empire that lay between them. As a related enterprise, he worked to end the separation between the Western and Eastern versions of Christianity. In 1678, he published a book—written in Latin, with a Persian introduction—intended to explain the East to the West and thus further those aims. Never reprinted or translated, it has remained virtually unknown until now.

Bedik was raised in an Armenian, Christian community in Ottoman-ruled Aleppo. At the age of 16, he was sent to Rome by his mother to avoid forced conversion to Islam. For seven years he attended a missionary college there, but his theological education abruptly ended in 1668 when he was expelled for carousing. Soon after, he left Rome in the company of the archbishop of Nakhchivan, in present-day Azerbaijan. En route the two agreed to launch a project to unite the Armenian Church with that of Rome. Bedik wanted to use this plan as leverage to get European Roman Catholic support for the protection of Armenian Christians.

From Armenia Bedik travelled to Iran and spent 5 years there. In his book, which is mostly about his time in there, he is aggressively Christian and scathing about Islam, but not about Iran and Iranians. And he goes to great pains to show that the Shah was more than willing to enter into a pact with the Pope and the Christian princes of Europe to jointly attack the Turks from all sides.

The value of this long-forgotten book lies in Bedik’s talents as a knowledgeable, linguistically-skilled and keen-eyed observer, although a highly partisan one. Its pages contain fascinating descriptions of the court, customs, and people of Iran, including such unique information as the ash-e su memorial banquet ceremony; the abbasiyaneh drinking custom; how Persians threw a party and their cooking; the Nowruz ceremonies; the various breeds of horses; the race of messengers, and the Caspian Kalmyk nomadic tribe’s annual oath to the Russian tsar.

Bedik eventually returned to Europe, entered the Holy Roman Emperor’s service as diplomat and soldier, and was made a count. In 1683, he was appointed ambassador and sent to Iran to discuss joint military action against the Ottomans and to seek better treatment for Iran’s Christians. En route, after discussions in Warsaw, he disappeared in Russia. In this book, his vital and adventurous spirit lives again.

Colette Ouahes lives in Bethesda, Maryland where she taught Latin and Classical Greek at the French School until her retirement.