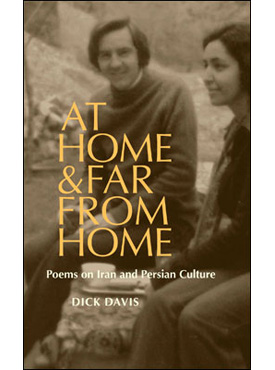 View Gallery
By Dick Davis In Backlist and Poetry Tagged In 20th Century and Books by Dick Davis.

At Home, and Far from Home: Poems on Iran and Persian Culture

Persian poetry, a literary heritage as rich as any in the world, found a brilliantly versatile voice when Dick Davis began his career as a translator several decades ago. Yet his English-language renderings–ranging from epics such as The Shahnameh and Vis & Ramin to the concentrated wisdom of Rumi and Hafez–are just one measure of his gifts with words. Davis is also an acclaimed poet, with a voice and sensibility very much his own.

At Home, and Far from Home, his ninth book of poetry, focuses on Iran and how it stirs him. Some of the poems draw on his scholar’s knowledge of Persian history and culture to reach into long-ago lives and minds: poets, artists, adventurers. In others, he weaves a gossamer net to catch subtleties of love, grief, or spiritual yearning. In still others, he looks at himself as a traveler, translator, and, for many years, an Englishman in a country often suspicious of the West. Sometimes the tone is witty, sometimes tender, but keen imagination and sharp intelligence are always in play as he explores the pull and aura of Iran.
It is a remarkable collection–proof that, as Davis writes of another poet,

“A British poet married to an Iranian, Dick Davis teaches Persian literature in the United States. The cultural diversity of his life is reflected in the variety of his poems–in their skillfully handled formal range, in the scope of their subject-matter and in their commitment to an ideal of civilized life shared by many cultures. Belonging is a profound and beautiful collection, which stimulates, dazzles, surprises and delights.”

–The Economist, which chose Belonging as a “Book of the Year” for 2002.

“[Dick Davis’s translation] possesses the simplicity and elevation appropriate to an epic but never sounds grandiose; its sentences are clear, serene and musical. At various heightened moments—usually of anguish or passion—Davis will shift into aria-like verse, and the results remind us that the scholar and translator is also a noted poet.…Thanks to Davis’s magnificent translation, Ferdowsi and the Shahnameh live again in English.”

—Michael Dirda in The Washington Post Bookworld, which selected Shahnameh: The Persian Book of Kings  as “One of the Ten Best Books of 2006.”

“One of the most extraordinary and fascinating love narratives produced anywhere in the medieval world, Islamic or Christian….Excellent introduction makes a convincing case for Vis and Ramin being the source for Tristan and Isolde…New translation by the poet Dick Davis, widely regarded as our finest translator of Persian poetry, in heroic couplets…This wonderful work should win Gorgani the Western audience he richly deserves.”