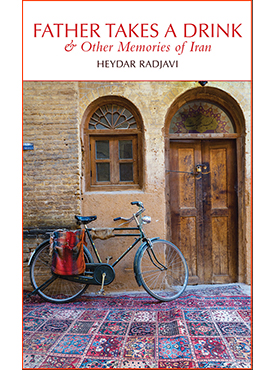 Father Takes a Drink and Other Memories of Iran

This is a collection of short stories that can best be described as informal oral history of life and culture in Iran, recorded as light-heartedly as possible.
The book features various aspects of the ongoing clashes between the forces of modernity and those of “return to self,” which began with the revolution of 1905 and culminated in the revolution of 1979. As pointed out in the preface to the book, most of the people who populate the stories were personally known to the author. The events cover more than half a century–starting from the upheavals of World War II when the author was a young child.

“Father is going to get drunk now, isn’t he?” I asked Mother, no longer able to hide my anxiety. Father had just imbibed his first alcoholic beverage in his long life.  He looked very nervous. Mother was biting her lip.  I knew right away, from my parents’ embarrassed and silent reaction, that my question shouldn’t have been posed at all… .  Father, having complained of persistent fatigue for months, had finally decided, with extreme reluctance, to obey his doctor’s orders. The daring doctor had prescribed a small dose of cognac, this impure and evil substance, to be stirred into tea and taken after every evening meal for several weeks…. .” (Father Takes a Drimk)

“I have composed almost eleven kilos of poetry,” announced Mr. Parnian… .  He gently put down a sizable bundle of paper on the spare desk in my office at Pahlavi University in Shiraz. Then he smiled shyly and said, “And, for your perusal, here are some samples I promised you yesterday… .”  (The Guardian of Rhythm and Rhyme)

“The day I was banned from women’s bath houses in my home city of Tabriz I wasn’t quite six years old yet.  I’d done nothing untoward, I must say right away.  My mother and I had just used the facilities of the large neighborhood bath house—as we had every week, together with many other women and children—and we were just about to leave when the manager spoke. ‘Why don’t you bring along the boy’s father too, next time?’ she asked Mother sternly.  Mother looked embarrassed. She had to explain to me what the sarcastic question really meant.  It was not a question, but an order… .” (Showers Come to Town)

“Death to Radjavi!” exclaims the Persian graffiti on the wall of this London Underground station. It is not the first such slogan I’ve faced since I entered the subway a few minutes ago. The name on the wall coincides with mine, but I am not the target of the threatening message, I know.  I also know who it is they wish dead. .. .”(What’s in a Surname?)

“I committed my second, and last, act of vandalism when I was a fully grown man, a supposedly respectable professor at an Iranian university.  It had been some twenty years since my first such act, which was described at the time as ‘uncivilized but just’ by my best friend and accomplice in the act. .. .” (Justice Couldn’t Wait)

“ ‘His Majesty has decided to allow free elections in our city,’ said my new colleague Ali… .” (Dreaming of Free Elections)

Look to Your Left First 19

Russian Movies at Your Own Risk 55

The Guardian of Rhythm and Rhyme 67

Heydar Radjavi was born and raised in Tabriz and did not leave that city until he was admitted to the University of Tehran in 1953. He was in love with modern Persian literature and dreamed of being a writer until he switched to mathematics at the end of high school (but that is another story). He received his doctorate from the University of Minnesota, in 1962 and taught in Iranian, American, and Canadian universities until he moved permanently to Canada in 1972. He now lives in Waterloo, Ontario, with his wife Ursula. He has published books and articles in mathematical journals, and was known to most of his friends and acquaintances as a mathematician until his first collection of short stories, French Hats in Iran, published in 2011. Father Takes a Drink is his second collection of memories of old Iran.