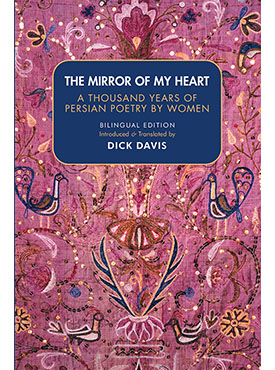 Excerpts from the Book
By Introduced & Translated by Dick Davis In Bilingual Featured, Bilingual Text, and Poetry Tagged In Books by Dick Davis, Feminism, Poetry by Women, and Women.

The Mirror Of My Heart: A Thousand Years of Persian Poetry by Women, BILINGUAL EDITION

This new bilingual edition of The Mirror of My Heart – the poems in Persian and English on facing pages – is a unique and captivating collection introduced and translated by Dick Davis, an acclaimed scholar and translator of Persian literature as well as a gifted poet in his own right. In his introduction he provides fascinating background detail on Persian poetry written by women through the ages, including common themes and motifs and a brief overview of Iranian history showing how women poets have been affected by the changing dynasties. From Rabe’eh in the tenth century to Fatemeh Ekhtesari in the twenty-first, each of the eighty-four poets in this volume is introduced in a short biographical note, while explanatory notes give further insight into the poems themselves.

One of the very first Persian poets was a woman (Rabe’eh, who lived over a thousand years ago) and there have been women poets writing in Persian in virtually every generation since that time until the present. Before the twentieth century they tended to come from society’s social extremes. Many were princesses, a good number were hired entertainers of one kind or another, and they were active in many different countries – Iran of course, but also India, Afghanistan, and areas of central Asia that are now Uzbekistan, Turkmenistan, and Tajikistan. Not surprisingly, a lot of their poetry sounds like that of their male counterparts, but a lot doesn’t; there are distinctively bawdy and flirtatious poems by medieval women poets, poems from virtually every era in which the poet complains about her husband (sometimes light-heartedly, sometimes with poignant seriousness), touching poems on the death of a child, and many epigrams centered on little details that bring a life from hundreds of years ago vividly before our eyes.

From the 1800s to the Present xxxviii

Selecting the Poems in this Volume lviii

A Note on the Sources lxix

A Note on Iranian Dynasties lxxiv

Map Showing the Places Mentioned in the Book lxxvi