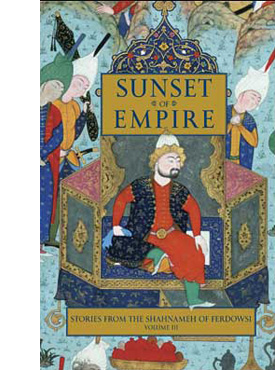 View Gallery
By Abolqasem Ferdowsi, Translated by Dick Davis from the original Persian In Poetry and Shahnameh Tagged In 10th Century, 11th Century, and Books by Dick Davis.

Sunset of Empire: Stories from the Shahnameh of Ferdowsi: Volume III

Among the masterpieces of world literature, perhaps the least familiar to English readers is the Persian Book of Kings (Shahnameh, in Persian). This prodigious national epic, composed by the poet Ferdowsi between 980 and 1010, tells the story of ancient Persia, beginning in the mythic time of Creation and continuing forward to the Arab-Islamic invasion.

With our third and final volume of stories from the Shahnameh we move from mythology and legend to romanticized history. Here the mighty events that shook ancient Persia from the time of Alexander of Macedon’s conquest to the Arab invasion of the seventh century C.E. are reflected in the stirring and poignant narratives of Ferdowsi, the master poet who took on himself the task of preserving his country’s great pre-Islamic heritage. We see vast empires rise and fall, the rule of noble kings and cruel tyrants, the fortunes of a people buffeted by contending tides of history. Larger than life individuals are vividly depicted—the impulsive, pleasure-loving king Bahram Gur, the wise vizier Bozarjmehr, the brave rebel Bahram Chubineh, his loyal defiant sister Gordyeh, and many others—but we also see many vignettes of everyday life in the villages and towns of ancient Persia, and in this part of the Shahnameh Ferdowsi indulges his talent for sly humor much more than in the earlier tales. The poem rises to its magnificent climax in its last pages, when the tragic end of an era is recorded and Ferdowsi and his characters look with foreboding towards an unstable and fearful future.

Breathtaking miniatures from the finest Persian Shahnameh manuscripts of the sixteenth and seventeenth centuries, many of them published here for the first time, heighten the emotional impact of the text.

The Story of Kebrui;
Bahram Forbids the Drinking of Wine

At dawn the next morning Bahram called for wine, and his courtiers began another round of merry-making. At that moment the headman of a village entered with a present of fruit: he brought camel-loads of pomegranates, apples and quinces, and also bouquets of flowers fit for the royal presence. The king welcomed this man, who had the ancient, noble name of Kebrui, and motioned him to a place among the young men there. He handed him a large goblet of wine, that held two maund. The visitor was pleased at the king’s and his courtiers’ attention, and when he had drained the cup, he caught sight of another and felt a craving for it in his heart. In front of all the nobles there he reached out and seized it. He stood and toasted the king, and said, “I’m a wine-drinker, and Kebrui is my name. This goblet holds five maund of wine, and I’m going to drain it seven times in front of this assembly. Then I’ll go back to my village, and no one will hear any drunken shouts from me.” And to the astonishment of the other drinkers there he drained the huge cup seven times.

With the king’s permission he left the court, to see how the wine would work in him. As he started back on his journey across the plain, the wine began to take effect. He urged his horse forward, leaving the crowd who were accompanying him behind, and rode to the foothills of a mountain. He dismounted in a sheltered place and went to sleep in the mountain’s shadow. A black raven flew down from the mountain and pecked out his eyes as he slept. The group that had been following along behind found him lying dead at the foot of the mountain, with his eyes pecked away and his horse standing nearby at the roadside. His servants, who were part of the group, began wailing and cursed the assembly and the wine.
When Bahram awoke from sleep, one of his companions came to him and said, “Kebrui’s bright eyes were pecked out by a raven while he was drunk at the foot of a mountain.” The king’s face turned pale, and he grieved for Kebrui’s fate. Immediately he sent a herald to the palace door to announce: “My lords, all who have glory and intelligence! Wine is forbidden to everyone throughout the world, both noblemen and commoners alike.”

The Story of the Cobbler’s Son and the Lion:
Wine Is Declared Permissible

A year passed, and wine remained forbidden. No wine was drunk when Bahram assembled his court, or when he asked for readings from the books that told of ancient times. And so it was, until a shoemaker’s son married a rich, wellborn, and respectable woman. But the shoemaker’s boy’s awl was not hard enough for its task, and his mother wept bitterly. She had a little wine hidden away; she brought her son back to her house and said to him,

The boy drank seven glasses down, and then an eighth, and the fire of passion flared up in him immediately. The glasses made him bold, and he went home and was able to open the recalcitrant door; then he went back to his parents’ house well pleased with himself. It happened that a lion had escaped from the king’s lion-house and was wandering in the roads. The cobbler’s son was so drunk that he couldn’t distinguish one thing properly from another; he ran out and sat himself on the roaring lion’s back, and hung on by grasping hold of the animal’s ears. The lion keeper came running with a chain in one hand and a lariat in the other and saw the cobbler’s son sitting on the lion as unconcernedly as if he were astride a donkey. He ran to the court and told the king what he had seen, which was a sight no one had ever heard of before. The king was astonished and summoned his advisors. He said to them, “Inquire as to what kind of a man this cobbler is.” While they were talking, the boy’s mother ran in and told the king what had happened.

The king laughed at the old woman’s words and said, “This story is not one to hide!” He turned to his chief priest and said, “From now on wine is allowed again. When a man drinks he must choose to drink enough so that he can sit astride a lion without the lion trampling him, but not so much that when he leaves the king’s presence a raven will peck his eyes out.” Immediately a herald announced at the palace door, “My lords who wear belts made of gold! A man may drink wine as long as he looks to how the matter will end and is aware of his own capacity. When wine leads you to pleasure, see that it does not leave your body weak and incapable.”