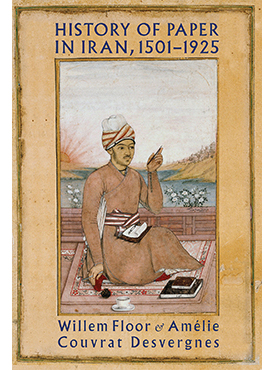 The Chinese invented papermaking, which by the 8th century had reached the Muslim world in Samarkand and Baghdad, and Spain by the 11th century. Much later at the end of the 18th century onwards, modern, industrial papermaking was developed by the Europeans. The History of Paper in Iran, 1501 to 1925 sets out for the reader the types of paper made in Iran during the Safavid and Qajar periods and the crucial role imported paper played in the country.
The Iranian government attempted to introduce modern European paper production technology, first by sending students abroad to learn about this technology and then by purchasing equipment to set up a paper industry. However, during the 19th century, domestic Iranian paper production came under increasing pressure from paper imports, and the government abandoned its efforts to modernize the domestic paper industry.
The authors, renowned scholar Willem Floor in collaboration with Amélie Couvrat Desvergnes a museum conservator of artworks on paper and books, identify and illustrate the watermarks and/or countermarks of the various paper producers and provide examples of the diversity of quality, composition, and nature of the different types of paper used by various strata of the Iranian society. Also provided are detailed import data, showing which country exported paper to Iran, via which routes, as well as their changing market position over time. Finally, the various end uses of paper, from books and farmans to paintings, and diverse packing and utilitarian paper are examined and, where possible, quantified data are presented. This book will reward scholars and general readers alike.

Amélie Couvrat Desvergnes is an independent conservator working on paper artworks, books, maps, posters, 3D paper objects, modern art. She received her M.A. in Conservation from the University Panthéon-Sorbonne-Paris in 2002. She has worked at la Bibliothèque Nationale de France, the Victoria & Albert Museum, the Tate Britain, as well as at the National Museum of India in New-Delhi. Amélie specializes in Islamicate manuscripts and Indian miniatures paintings.