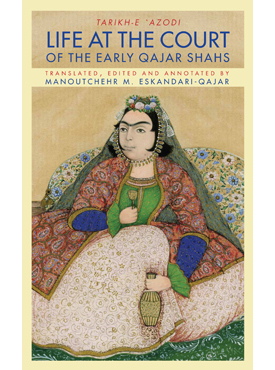 Tarikh-e Azodi, Life at the Court of the Early Qajar Shahs

Life at the Court of the Early Qajar Shahs,a memoir translated into English for the first time, offers a uniquely intimate look at a world veiled by privilege and power. Its author, Soltan Ahmad Mirza, was a prince—the forty-ninth son of Fath Ali Shah Qajar, who ruled Iran from 1797 to 1834. Looking back over the reigns of his father and two other shahs, he assembled a vast wealth of detail about life at the apex of Persian society: the role of the ruler, the hierarchy of the harem, court eunuchs, ceremonies, diversions, disputes, occasional violence, and—as a nexus for it all—an extraordinarily intricate web of connections by birth and marriage.

Among members of the royal family, Soltan Ahmad Mirza was revered for his vivid recollections of the past. When he set about composing his memoir in 1886, he widened his own knowledge by drawing extensively on the memories of women of the court—his mother (the favorite among his father’s hundreds of wives), his sisters, aunts and other residents of the harem. As a result, for the first time in any work about the period, women shine and cut sharp and sometimes-splendid figures. They are not mere appendages to the greater glory of the ruler, passively submitting to the dominant religious and patriarchal structure. Rather, they are complete persons, some of them highly intelligent and resourceful, as related in the memoir’s many vignettes about their influence in court matters

This translation not only includes the complete text of Soltan Ahmad Mirza’s memoir, but is augmented with a great deal of additional contextual information and ancillary materials that makes the book an invaluable source to those interested in this important era of Iranian history.

Dr. Eskandari-Qajar is founder/president of the International Qajar Studies Association (IQSA), a scholarly association dedicated to the study of the Qajar era. In 2009, he joined a team of scholars at Harvard University working on the NEH-funded Women’s Worlds in Qajar Iran Harvard Project. The Project’s aim is to safeguard digitally and make available documents, photographs and oral history of women in the Qajar era.