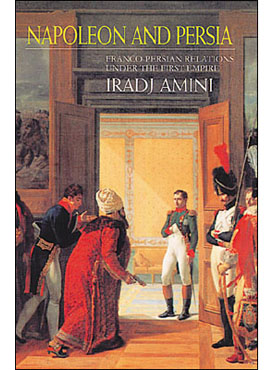 Napoleon and Persia: Franco-Persian Relations Under the First Empire

Franco-Persian relations have long been neglected by Napoleonic scholars, however, they show how Napoleon’s political and strategic thinking extended far beyond the frontiers of Europe. Begun in 1802 under the Consulate, those relations culminated in the signature of the Treaty of Finkenstein, on 4 May 1807, and the dispatch of the Gardane Mission to Tehran. For Napoleon, who was then fighting the Tsar’s forces in Poland, the Persian alliance served a dual purpose. While it created a temporary diversion against Russia, it also threatened British interests in India.

This Franco-Persian alliance, which brought Persia into the realm of international rivalries, might have survived had Napoleon kept his part of the bargain. However, having made his peace with the Tsar at Tilsit, in July 1807, and anxious to extricate himself from the Spanish quagmire, he sacrificed Persia’s interests to his own in Europe. To the British, who were waiting on the sidelines, Napoleon’s about-face was a windfall. Having long wished to dislodge the French from Persia, they were pleased at last to take their place in 1809.

This volume discusses in detail those years of delicate diplomacy, complicated by the problem of distance, the intrigues of Britain and the intransigence of Russia. The dangerous existing conditions, the unique personalities of the protagonists, and the formidable subtlety of the Persian make this a riveting tale of international politics.

Written in a style which brings together historical facts and entertaining anecdotes, Napoleon and Persia will appeal not only to scholars, but to a wide readership interested in the history of Europe, military studies, and international relations

“Napoleon and Persia is enhanced by ample scholarship and a flowing style.”

“Iradj Amini gives us a remarkable study of Franco-Persian relations.”

However, upon Ferriol’s recall from Turkey in 1711, Fabre’s widow returned from Constantinople, and although she had every reason to hate her late husband’s mistress, she gave evidence on her behalf. It was probably her intervention which led the judicial authorities to take a more lenient view of Marie’s conduct, and in 1713 she was released

Iradj Amini was born in Tehran in 1935 and educated in the United States, Iran and England. He joined the Iranian Foreign Service in 1965 and served as Ambassador to Tunisia. Now working as a journalist, he has lived in Paris since 1992. For Mage Publishers he wrote the book Napoleon and Persia: Franco-Persian Relations Under the First Empire. Mr Amini can be contacted via e-mail.