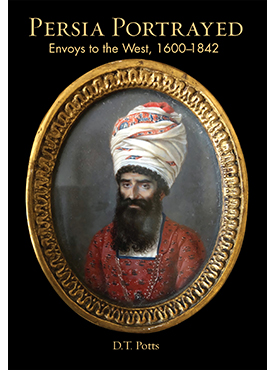 View Gallery
By D.T. Potts In Featured, History, and Non-Fiction

Persians who travelled to the West during the Safavid and early Qajar period (early 17th-to-early 19th century) have received little attention. This book memorializes them in portraiture and pulls them back from historical obscurity. It brings together twenty-nine images—drawings, paintings, etchings, lithographs and even a silhouette—done in Boston, Geneva, London, Paris, Prague, Saratoga Springs, St. Petersburg, Vienna and Washington DC, between 1601 and 1842. In the days before photography, portraits commemorated their visits to distant capitals. Some of the subjects were members of Persia’s élite, some from modest backgrounds, and all were on a mission of one sort or another. Today, the images offer us rare glimpses of the dress, accoutrements and regalia that so distinguished the travelers. Subjects of fascination for both contemporary artists and a public intrigued by all things Persian, the sitters in these works left an indelible mark in the consciousness of Western observers, only a few of whom ever journeyed themselves to the Land of the Lion and the Sun.

Envoys to the West 1

Khosrow Mirza and His Companions 49

D.T. Potts is Professor of Ancient Near Eastern Archaeology and History at the Institute for the Study of the Ancient World, New York University. His lifelong fascination with and love of Iranian history and archaeology began with his first visit to Iran in 1973 and has led him to work on a wide range of topics extending in time from prehistory to the modern era. He is the author of The Archaeology of Elam: Formation and Transformation of an Ancient Iranian State (Cambridge, 1999, 2nd ed. 2016) and Nomadism in Iran: From Antiquity to the Modern Era (Oxford, 2014). He was also the editor of The Oxford Handbook of Ancient Iran (Oxford, 2013) and Agreeable News from Persia: Iran in the Colonial and early Republican American Press, 1712-1848 (Springer, 2022).