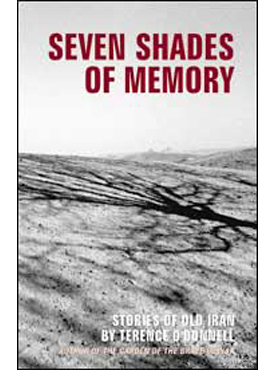 Terence O’Donnell lived in Iran from 1957-71 operating a farm from 1963-70 before returning to America, where he wrote Garden of the Brave in War, a memoir praised by critics as “a gem” and “a literary classic on a level with Out of Africa.” Seven Shades of Memory is his first collection of short stories. The stories share the theme of cultural collision, either as East meets West, or as members of different cultures within Iran tentatively interact. These stories show his prescient understanding of the multifaceted nuances of Persian culture and the Westerners who attempt to navigate through it.

In “The Tree and The Pool” an American Consul’s desire for a swimming pool sets off a chain reaction of cross-cultural misunderstanding.
The title characters in “The Prince and The Baker” live next to one another and yet inhabit separate social strata. The elderly prince sits in his mansion surrounded by the memorabilia of his life, alone save an elderly servant. The baker works from dawn to dusk so that he is able to host weekly gatherings of poets and musicians in attempt to find the path of the Sufi. One day the prince and the baker are brought together and a subtle friendship blossoms.

” The Women and The Ladies” is a short vignette about two American women tourists. Their conversation with a waiter reveals the cultural milieus in which each side lives.
” The Holy Men of Isfahan” brings together the representatives of Isfahan’s Muslims, Jews, and Christians in a conversation, sorrowfully underscoring how religion separates, despite the best of intentions.
A wealthy Norwegian family vacations in an unfashionable part of Iran in “The Duck Hunt” in a story reminiscent of what Ingmar Bergman might have filmed had he visited Iran.
In “The Stone of Love” a man takes his holiday in a hotel on the shores of the Caspian Sea. In the hotel courtyard one evening, he has a surreal vision in which six travellers arrive. One of them, a jeweler, displays a unique diamond to the others who later approach him one by one, attempting to obtain the jewel.
And finally, “Mrs. Cahn” is an elderly American philanthropist on a museum tour of Iran. Weary of life, she prefers to rest outside a rural teahouse while her group visits a nearby site. From a bench she takes small pleasures in her surroundings and the local tribespeople who gather around her. Touched by their hospitality and respect, she is able to find peace at last.

Praise for Terence O’Donnell’s Garden of the Brave in War: Recollections of Iran

” Mr. O’Donnell explains more about the cultural context in which we must understand Iran than any other modern writer about the Middle East.”

” …a book of recollections that is a work of art. The book is a gem that could become a small classic of its kind.”

” Enchanting glimpses of life in the countryside of southwestern Iran… an improbable combination of Turgenev, Steinbeck and Isak Dinesen.”

” A book of sensibility and beauty, mad all the more striking just now by the insight it gives into Iranian culture and character.”

They looked so out of place, standing there on the quay by the sluggish, brown waters of the estuary. Their eyes so blue, the fine blond hair, the white skin and pink cheeks, something cold, clear, and shining about them, like ice in sunlight. One could imagine them sailing in the salty cold waters of the Baltic, bound for a wooded island, not here in the drowsy warmth and heaviness of the Caspian coast and bound for a place the locals called the Morghab, the dead lagoon.

The Osbergs were Norwegian: Count Maximilian Osberg (he used his title when abroad); his wife, Ingar; their three children, Anna, Pehr, and Lena; and the children’s tutor, Johan-Erik. Every other year the Osbergs wintered in places that were hot and bright; Sicily, Greece, Spain, but this year for a change they had come to Persia, thinking the Caspian coast, in addition to the heat and light, would be an exotic, unspoiled place. They were wrong. There were villas here too and even uglier than those in Europe. And it was not so much hot as muggy. Nor, for that matter, was there much brightness, for the sky was often overcast.

Other things, too, had gone wrong. Anna, the elder daughter, 15, and Johan-Erik, the tutor, appeared to be having an affair. The Count did not approve. Affairs were permissible for men-he had had his own-but not for women, for an affair could distract a woman from her familiar duties. “But Anna is not a mother!” his wife had said with exasperation. In any event, Ingar did not disapprove of affairs for women. Then Pehr, the ten year old boy, had been unwell since they had come, nothing they could pin down, headaches, a general malaise. The Count worried-unreasonably he knew-that his own father’s chronic neurasthenia had passed on to the grandson. Finally, six year old Lena had fits of quiet sobbing with no apparent cause. The Count loved Lena more than anyone.

The place the Osbergs had chosen for their sojourn was called Ghaziun-the place of the geese. They had chosen the region because it was unfashionable, unlike the resorts down the coast with their casinos, European-style hotels and royal palaces. Across the estuary from Ghaziun-a mere village-there was indeed a resort, but it was a down-at-the-heels sort of place patronized by small tradesmen, tailors, clerks, the kinds of people who could afford no more than the reed cabanas which lined the beach.

They were also the kinds of people whose ladies kept their chadors, their veils about them when wading in the sea-unlike the resorts down the coast where the ladies of the rich wore the briefest bikinis they could find. In the beginning, the Osbergs’ greatest amusement was to walk the beach and watch the veiled ladies in the sea, so hilariously grotesque to see them clutching at their veils in the slap of the wind and hear their squeals when a wave swept up their legs.

” Poor creatures,” Ingar would say of the veiled women, at the same time irked that she was not free to wear her own bikini. As it was, the Osbergs were stared at enough, for the people were fascinated by their whiteness and blondness and the strange color of their eyes. As time passed this staring-and sometimes laughter-had inclined the Osbergs, without their quite realizing it, to remain more and more at home.

This in part was the reason for the excursion to the Morghab; there would be fewer staring eyes. Also they had been told of the gigantic tulips growing in the waters of the Morghab and now in bloom. Finally, there was the locals’ curious manner of netting ducks at night with gongs and torches. The Count was an ardent hunter-especially hunting ducks in the reedy lakes of his estate-but he had never heard of netting and wished to see it done. Because it was to be a nocturnal hunt, the Osbergs had packed a picnic supper which they planned to take at some country teahouse when night fell.

The punt the Osbergs had hired finally drew up to the quay. The boatman stood barefoot in the stern, a stocky, strong-looking young man in sky-blue pajamas-locally worn outdoors as well as in-and a sleeveless undershirt, so white against the brownness of his body. He held a punting pole in one hand while with the other he gave the Osbergs a playful, almost mocking, salute. Like all the local men, he was shaven-headed and had an oval face with eyes which made the Count think of the eyes in Byzantine icons, so black and cold, so staring they seemed unseeing and yet the Count sensed they saw everything, down to the tiny, purple birthmark that blotched his cheek.