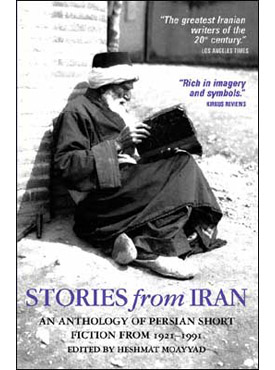 View Gallery
By Edited by Heshmat Moayyad, Translated by scholars at the University of Chicago In Fiction Tagged In 20th Century, Houshang Golshiri, and Short Stories.

Stories from Iran: A Chicago Anthology

This $35 book can be purchased from Amazon

This collection of thirty-five Persian short stories by twenty-six of Iran’s best known contemporary writers gives voice to the concerns, strivings, and visions of their generation. In styles ranging from the dark to the humorous, from the elegant to the poetic, these stories depict aspects of both traditional and modern life in Iran with its many religious, political, cultural and class tensions. The expanding role of women in Iranian society is attested to both by the large number of women writers included in the volume, and by the central role played by women in many of the stories.

Written during the last 75 years and arranged in chronological order, these stories span a period in Iranian history from the Constitutional Revolution (1906-11) through the long reign of the Pahlavis (1925-79), the upheavals of the 1950s, the 1979 Islamic Revolution, to the present.

Stories From Iran was selected, edited, and translated by scholars of Persian Literature at the University of Chicago. Accompanied by a complete glossary, author biographies and photos, it will give the reader an unmatched insight into Iranian life–an insight that only true works of art can provide.

“The first and most comprehensive body of short fiction in translation, Stories From Iran samples the works of some of the greatest Iranian authors of this century, as well as those by lesser known writers with few published stories to their name. . . . The translation and publication of these works does a rare and valuable service to the literature of the East and West alike.”
– – Los Angeles Times

“This anthology is not only a timely introduction to an unfamiliar literature but offers as well illuminating insights into a society where the postmodern and pre-Renaissance still uneasily coexist. . . . Rich in imagery and symbols.”

“[the stories] stand out for their originality and well-modulated feeling.”

“The writings examine the most common social, political, economic, and cultural concerns of Iranians. Readers will find modern Iranian writers for the most part conscious and critical of their society and committed to ameliorating its conditions. . . . The translations are smooth and quite readable.”

“The selection, editing, and translation [of the stories] were undertaken by scholars of Persian literature at the University of Chicago. Their work will clearly benefit other scholars in the field and contribute to a better understanding of the Persian short story among nonspecialists.”

He edited the collection Stories from Iran: A Chicago Anthology For Mage Publishers.