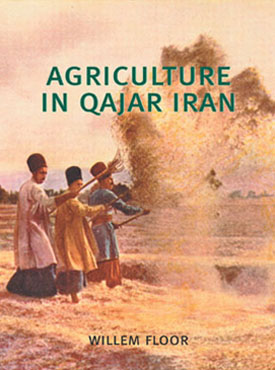 AGRICULTURE was the mainstay of Iran’s economy in the nineteenth century, yet little is known about it. Historians have rarely taken that important reality into account when writing on the economic or social history of that period, and until now there have been no comprehensive studies of Iranian agriculture. Now, in Agriculture in Qajar Iran, renowned scholar Willem Floor has compiled an all-encompassing analysis of nineteenth-century Iranian agriculture based on extensive research into previously untapped Persian and European archives. Floor presents farming in Iran from the ground up and in its every dimension. His investigation covers farming methods like irrigation and seeding, the raising of livestock, and the range of crops cultivated, from wheat, barley, and rice, to the more notorious cash crops of tobacco and opium. Floor also delves into methods of forestry and fishing, subjects about which very little is known and even less has been written, until now.

Agriculture in Qajar Iran traces the commercialization of Iranian farming, and explains how this process altered the structure of Iran’s economy. The change included the rise in cash crops, the growth of wage labor, the rise in off-farm employment, and the market economy’s growing influence in the countryside. Floor also highlights the importance of trade within this burgeoning system, and gauges the impact of the commercialization of agriculture on the rural population’s socioeconomic status.

Agriculture in Qajar Iran presents fascinating accounts of just how the Iranian peasantry lived, vivid stories of what they ate, how they dressed, and whether or not the new agricultural order enriched or impoverished their lives. The study is richly illustrated with photographs and drawings from the period which illuminate and enliven Floor’s subjects. Because of the enormous impact the agricultural sector had on the welfare of the entire nation, rich and poor, and on the social and cultural, as well as on the economic life of the country, Agriculture in Qajar Iran is a must-read for those interested in the history of Iran, and rural sociology, international trade, and development economics.