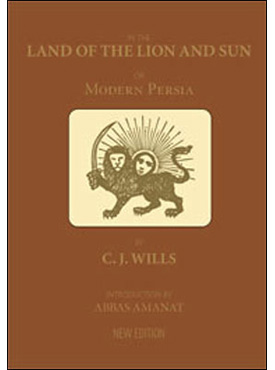 C.J. Wills was an English physician who traveled widely in Iran from 1866­81-while working for the Indo-European Telegraph Department. With a discerning eye for detail, Wills wrote an intimate anthropological account of Qajar-era Iran, rich with description of everyday life, popular beliefs and practices, and arts and crafts, as well as health practices and communications that were his professional concern.

In the Land of the Lion and Sun, the second volume to appear in Mage’s Persia Observed series, provides a fresh and fascinating insight into both a time and place, as well as the biases and sympathies of a generation.

In his introduction to this new edition of Wills’ book, Abbas Amanat presents a critical reading of Wills’ career, his works, and his view of Qajar Iran

“The character of the Persian, as it appears to me, is that of an easy-going man with a wish to make things pleasant generally. He is hospitable and obliging, as honest as the general run of mankind, and is specially well disposed to the foreigner. He is very kind and indulgent to his children, and as a son his respect for both parents is excessive, developed in a greater degree to his father, in whose presence he will rarely sit, and whom he is in the habit of addressing and speaking of as “master;” the full stream of his love and reverence is reserved for his mother and an undutiful son or daughter is hardly known in the country. Home virtues among the Persians are many.

No act of serious import is ever undertaken without the advice of the mother; no man would think, for instance, of marrying contrary to his mother’s advice; and by the very poorest the support of their parents would never be looked on as as burden. Respect for the aged is universal; “this grey beard” is a common term of respect and an aged man or woman will frequently give an opinion unsolicited, and such advice is often requested, and always listed to as valuable.” (p. 314)

“A visit to the tomb of Saadi, or that of Hafiz, is common among the Shirazis for the taking of omens or “fal,” as they are termed. For a few coppers the dervish who usually acts as guardian to the tomb produces his well-thumbed manuscript copy of the poet, and, after an invocation to the Deity, he thrusts his knife into the closed volume between the leaves. Taking the passage at the top of the right-hand page, he recites it to the anxious inquirers” (p. 277)

C.J. Wills was an English physician who traveled widely in Iran from 1866-81 while working for the Indo-European Telegraph Department.