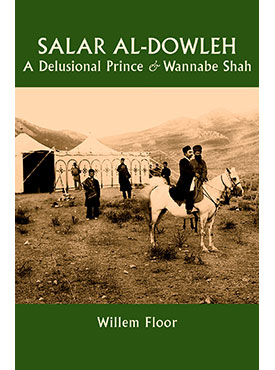 Salar al-Dowleh, the madcap prince and serial rebel, was a reflection of the unsettled political times during the early 1900s when Iranian society was trying to find its way toward a more democratic society. This is also clear from Salar al-Dowleh’s “career.” He was first courted by the democrats, when they ditched him, he tried to court them but when his nephew was enthroned instead of him, he joined the reactionary forces. As a serial rebel Salar al-Dowleh was a failure, because he did not have a program (apart from killing and plundering) that supporters could believe in. In fact, his rebellions had no other cause than himself. Salar al-Dowleh told each audience what it wanted to hear. He passed himself off as a constitutionalist, a nationalist, an anti-Russian, a pro-Russian, an anti-British, a pro-British, an Islamist, and anything else. He was an uncaring and rapacious governor and a murderous, destructive, plundering rebel, who did not care about the harm and misery he inflicted on his country and his countrymen. After his final ouster from Iran in 1913, driven by financial need, Salar al-Dowleh again tried to play a role in Iranian politics in 1914, 1918, 1924, 1925 and 1926. He was not successful in any of these and was finally exiled by the British to Haifa (1927-1936). When his Iranian pension was stopped, he moved to Alexandria (1936-1959), where he died, a forgotten man. For those interested in Iranian history, the rebellions started by the prince are as important to study as the political debates in the Majles–they both arose from the same unresolved dynastic, political, social, and economic conflicts in Iranian society during that turbulent period.

flirts with reformers to become heir-apparent 7

refuses to give up governorship of lorestan and rebels 10

supports the ex-shah’s bid to regain the throne 23

makes a bid for the throne himself 35

russia and britain urge salar al-dowleh to give up 52

defeats government force despite growing quarrels among his tribal supporters 57

flees to astarabad and calls on turkmen support 72

defeated at shahrud, seeks turkmen support and
deal with tehran 74

marches to rasht, defeated at tonkabon, flees to kurdistan 88

Movements in Kurdistan and Kermanshah
and Exile (July-September 1913) 92

germany accepts the help he offered 105

recalled from khaneqin (february 1915); rumors about
his return 109

intrigue in damascus and financial problems 122

flees, is captured and exiled to syria 133

marches on senneh and is defeated 139

Where to Send Salar al-Dowleh? 153

petition of the bastis to british consul, kermanshah
26 September 1912 190