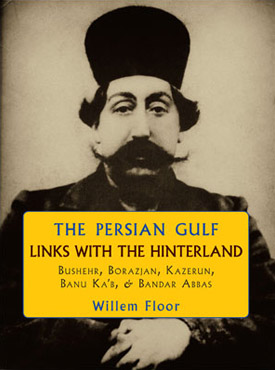 What happened in the port of Bushehr was influenced by events in nearby towns such as Borazjan and Kazerun, and far off provinces such as Khuzestan, as well as by the actions of local chiefs controlling the land adjacent to the trade route. The histories of Borazjan and Kazerun show the importance of the behavior of local chiefs and of migrating tribes in keeping the caravan route secure or not. A breakdown of the port city’s authority over its hinterland, in particular the trade route, impacted on its well-being both financially and politically. Likewise, the history of the Banu Ka`b in Khuzestan shows how the takeover of tribal leadership by a more commercially oriented lineage led to the rise of a rival port to Bushehr that ultimately would oust it from its leading position.

The description of the commercial route between Bandar Abbas and Isfahan, during the Safavid period, highlights the importance of road infrastructure in linking a seaport with the markets in its hinterland. The ports in the Persian Gulf were but caravan termini. The ports themselves did not constitute a major market for imports; the real market for these goods was in the interior of Iran and, therefore, the road linking the port and its markets was a lifeline for both. This study makes clear that what happened along that road, connecting the terminus and the market, determined to a great extent how much volume was shipped and at what cost. Finally, Links with the Hinterland also demonstrates how the attacks on mainly British-owned goods on the Bandar Abbas–Isfahan road bestowed a hue of nationalist resistance to the robber chiefs during