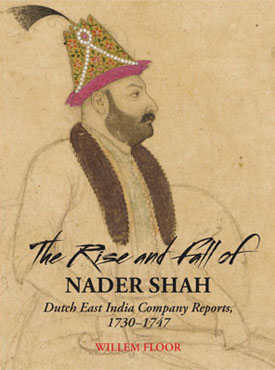 By any measure, Nader Shah—founder of the Afsharid Dynasty—ranks as a towering figure in Iranian history. Rising from the humblest of origins, he became a military commander of genius, restored an embattled Persia to imperial greatness, and proceeded to wield the power of the throne with a ruthlessness that approached derangement. Yet much about the man and his tumultuous times remains obscure. This book peers into the shadows by drawing on unusual source materials—unpublished letters and reports written by the staff of the Dutch East India Company, who watched in dismay as the tyrant sacrificed the nation’s economic health (and Dutch hopes for trade) to feed his war machine.

The book looks at his entire life: how a shepherd boy mastered fighting skills, assembled armies, reunited Iran and freed it from Afghan occupation, invaded and plundered both India and Ottoman Turkey, and crowned himself Nader Shah of Iran after usurping the Safavid throne in 1736. Because there are no other contemporary reports, published or unpublished, of this length and geographical scope, much of the information offered here is unique. Nader Shah, who not only ruined neighboring countries but also his own, is depicted in all his fury and bloodthirstiness —traits often glossed over by later court chroniclers. At times the Dutch observers are so sickened by his total disregard for the well-being of his country and for human life that they pray to God to release Iran from his hold. Release came in 1747, when he was taken by surprise in his bed and assassinated—but not before first killing two of the attackers.

For the first time in English, The Rise and Fall of Nader Shah makes these primary-source eyewitness reports of an important period in Iranian history available to historians and students alike.