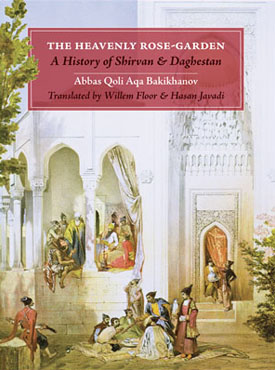 The Heavenly Rose Garden: A History of Shirvan and Daghestan

The Heavenly Rose-Garden is a fascinating portrait of the Caucasus at the dawn of the modern era. Written in Persian and completed in 1845, it offered the first look at the region by a native son, ‘Abbas Qoli Aqa Bakikhanov. It remains the only dedicated history of Shirvan and Daghestan to this day and also contains a great deal of interesting information about the Caucasus in general during the eighteenth and nineteenth centuries. Bakikhanov demonstrates that despite differences in language, religion, and ethnicity, all the peoples of the Caucasus traveled a similar historical road and, to some extent, shared an identity distinct from the Ottoman Turks and Persians of adjacent, larger states.

Translated for the first time into English by two eminent historians, The Heavenly Rose-Garden is a mine of information for scholars studying the region and an engrossing read for anyone else.

Abbas Qoli Aqa Bakikhanov was an Azerbaijani journalist, linguist, poet and philosopher. A scion of the Khan of Baku, he was born there in 1794. From 1820 to 1845 he served as a secretary and translator in the Russian army, which had taken over most of the Caucasus in previous decades. Throughout this time he traveled widely, carried out ethnographic studies and kept his ties with the literary establishment of the Caucasus, centered in Tiflis in present-day Georgia. He died in 1847.