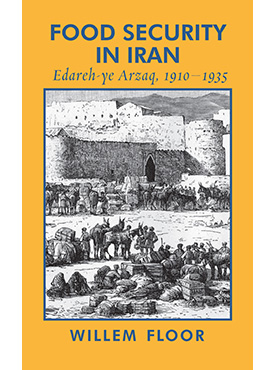 Until recent times, Iran regularly had to cope with local or national famines. The various governments, until the second decade of the twentieth century, had neither a policy nor institutional arrangements to deal with grain shortages, artificial or not, and the resulting famines. In severe cases of famine governments might have temporarily intervened in the market, but usually they left care for the hungry to private philanthropy. Invariably, this private effort was inadequate when compared to needs. Although there were earlier incidental efforts, it was only as of 1918 that a beginning was made for more permanent and structural pro-active measures to prevent rather than to combat famine. The creation of the Edareh-ye arzaq or Alimentation Service in Tehran and Tabriz to ensure food security saved thousands of lives in the years that followed. Despite this result, its work is almost totally ignored; there is not even an encyclopedia article about its activities. In this study, Willem Floor discusses the early efforts to combat famine as well as the beginning of a more targeted and structural approach developed by Lambert Molitor in Tabriz during 1917–18 as well as its application in Tehran as of 1918. Whereas in Tabriz, after 1918, the approach was reactive, in Tehran a pro-active program was developed, which as of 1922 became part of the tasks of the Millspaugh mission. During 1926–27 there was even a quasi-national food security program. After Millspaugh’s departure in 1927 the food security of Tehran became an entirely Iranian affair, which as of 1935 was transferred from the Alimentation Service to a State company that had a national food security responsibility.