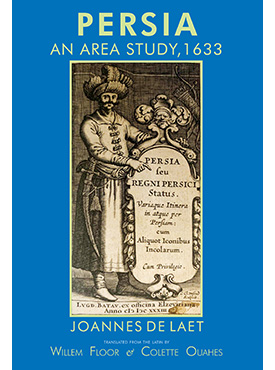 View Gallery
By Joannes de Laet, Translated from the latin by Willem Floor & Colette Ouahes In Featured, History, and Non-Fiction Tagged In 17th Century and Books by Willem Floor.

In the early-seventeenth century the European thirst for knowledge about other countries and cultures was growing, after all it was the Age of the Discovery. Iran was a little-known country at the time because commercial and diplomatic contacts had begun only a few decades earlier.

Before 1633, when this book was written, area studies on Persia did not exist. There were some books, travelogues, or reports on wars, but none about the people, the country, the culture, or the government. To fill this gap, Joannes de Laet, a wealthy and erudite merchant and scholar, published this book in a series of country studies that included the Netherlands, France, Spain, Portugal, Italy, Poland (Livonia, Latvia, Prussia), Turkey, Mogol India, Brasil, and the New World (West-Indies). Because de Laet had never been to Persia, he used classical Greek and Roman authors, medieval sources (including from Arab authors), and account by the most recent travelers. He also used information from Nicolaas Hem, an employee of the Dutch East-Indies Company, who had lived in Persia since 1623 and had just returned to the Netherlands. De Laet also had contacts with Jacob van Gool (Golius) the famous professor of Arabic and Hebrew at the University of Leiden, from whom he received data from as yet unpublished Arabic texts. The book offers in a nutshell what was known about Persia at that time from published sources and enriched by first-hand information from Hem and Golius.

This book was not only the first systematic and encyclopedic summary of all available information about Persia at the time, but it was also a well-informed one, even if most of the information was second hand. It also provided the framework for many later works about Persia.

Willem Floor studied development economics and non-western sociology, as well as Persian, Arabic and Islamology from 1963-67 at the University of Utrecht (the Netherlands). He received his doctoral degree from the University of Leiden in 1971. Since 1983, Dr. Floor was employed by the World Bank as an energy specialist, however, after his retirement in 2002, he has dedicated his time to the study of the social and political history of Iran, and has published extensively throughout this time. His books include: Public Health in Qajar Iran, Agriculture in Qajar Iran, and The History of Theater in Iran, as well as, The Persian Gulf: A Political and Economic History of 5 Port Cities, 1500-1730, its second volume, Persian Gulf: The Rise of the Gulf Arabs, 1747-1792, third volume, The Rise and Fall of Bandar-e Lengeh, the fourth volume, Bandar Abbas: The Natural Gateway of Southeast Iran, and the fifth volume, The Persian Gulf: Links with the Hinterland Bushehr, Borazjan, Kazerun, Banu Ka’b, & Bandar Abbas, The Persian Gulf: The Hula Arabs of The Shibkuh Coast of Iran, and The Persian Gulf: Dutch-Omani Relations A Commercial & Political History 1651-1806, and The Persian Gulf: Muscat – City, Society and Trade . He has also published, Travels Through Northern Persia, 1770-1774, Titles and Emoluments in Safavid Iran, and A Social History of Sexual Relations in Iran; Labor and Industry in Iran, 1850-1941; Guilds, Merchants and Ulama in 19th Century Iran; The Rise and Fall of Nader Shah; Games Persians Play, and History of Bread in Iran.

His translations include: Samuel Gottlieb Gmelin’s Travels Through Northern Persia 1770–1774 , and with Hasan Javadi, Abbas Qoli Aqa Bakikhanov’s The Heavenly Rose-Garden: A History of Shirvan & Daghestan; Evliya Chelebi’s Travels in Iran and the Caucasus, 1647 and 1654; A Man of Two Worlds: Pedros Bedik in Iran, 1670–1675, Awake: A Moslem Woman’s Rare Memoir of Her Life and Partnership with the Editor of Molla Nasreddin, the Most Influential Satirical Journal of the Caucasus and Iran, 1907–1931, and Engelbert Kaempfer: Exotic Attractions in Persia, 1684–1688: Travels & Observations.