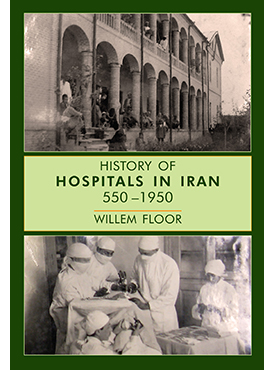 A“place for the sick” (bimarestan) had existed in Iran since the mid-sixth century, but such institutions never developed into real hospitals, except for a few instances during the tenth and eleventh centuries. Thereafter, until the twentieth century, their number was small and declining, and merely served as alms houses (dar al-shafa) for sick and poor pilgrims, which was why they were attached to mosques and religious schools (madrasehs). There was no major change in this situation until the mid-1880s. It was then that changes began to occur through the establishment of dispensaries, and later, hospitals. Four main groups were involved: the government of Iran, the government of (British) India and its affiliates, and American and British missionary organizations. Each had their own disparate policy objectives.

Although the first Iranian government hospitals preceded the ones established by American and British missionaries, the services they offered were limited. They did not include surgery, which was the comparative advantage of the foreign hospitals. In addition, the latter offered better trained physicians, nurses, modern medical methods of treatment, and the use of medical instruments and devices. As a result, these Western hospitals had an important impact on the training of Iranian physicians and nurses. They also introduced modern methods of medical treatment, surgery techniques and medicines. Furthermore, they made it more acceptable for Iranian patients to seek treatment in a hospital, an institution not traditionally viewed as a place to heal but rather as a place to die. Despite their increasing role in providing medical care, the urban-based hospitals were too few in number, and not geared to address Iran’s public health issues. In particular, they could not meet the medical needs of the country’s mainly rural population. Nevertheless, the hard work and sacrifice of the staff of these modern hospitals laid the groundwork for Iran’s much needed and comprehensive public health infrastructure and health policies. These were further developed in the 1930s and grew in speed and size during the 1950s.

This book, together with Willem Floor’s companion volume, The Beginnings of Modern Medicine in Iran, are essential histories for anyone interested in the inceptions of Iran’s modern health care system.

Willem Floor studied development economics and non-western sociology, as well as Persian, Arabic and Islamology from 1963-67 at the University of Utrecht (the Netherlands). He received his doctoral degree from the University of Leiden in 1971. Since 1983, Dr. Floor was employed by the World Bank as an energy specialist, however, after his retirement in 2002, he has dedicated his time to the study of the social and political history of Iran, and has published extensively throughout this time. His books include: Public Health in Qajar Iran, Agriculture in Qajar Iran, and The History of Theater in Iran, as well as, The Persian Gulf: A Political and Economic History of 5 Port Cities, 1500-1730, its second volume, Persian Gulf: The Rise of the Gulf Arabs, 1747-1792, third volume, The Rise and Fall of Bandar-e Lengeh, the fourth volume, Bandar Abbas: The Natural Gateway of Southeast Iran, and the fifth volume, The Persian Gulf: Links with the Hinterland Bushehr, Borazjan, Kazerun, Banu Ka’b, & Bandar Abbas, The Persian Gulf: The Hula Arabs of The Shibkuh Coast of Iran, and The Persian Gulf: Dutch-Omani Relations A Commercial & Political History 1651-1806, and The Persian Gulf: Muscat – City, Society and Trade . He has also published, Travels Through Northern Persia, 1770-1774, Titles and Emoluments in Safavid Iran, and A Social History of Sexual Relations in Iran; Labor and Industry in Iran, 1850-1941; Guilds, Merchants and Ulama in 19th Century Iran; The Rise and Fall of Nader Shah; Games Persians Play, and History of Bread in Iran. His translations include: Samuel Gottlieb Gmelin’s Travels Through Northern Persia 1770–1774 , and with Hasan Javadi, Abbas Qoli Aqa Bakikhanov’s The Heavenly Rose-Garden: A History of Shirvan & Daghestan; Evliya Chelebi’s Travels in Iran and the Caucasus, 1647 and 1654; A Man of Two Worlds: Pedros Bedik in Iran, 1670–1675, Awake: A Moslem Woman’s Rare Memoir of Her Life and Partnership with the Editor of Molla Nasreddin, the Most Influential Satirical Journal of the Caucasus and Iran, 1907–1931, and Engelbert Kaempfer: Exotic Attractions in Persia, 1684–1688: Travels & Observations.