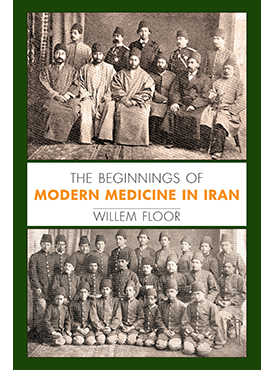 The Beginnings of Modern Medicine in Iran

Not much has been written about the early beginnings of modern medicine in Iran. With this book, renowned scholar Willem Floor, who has written more than fifty books on Iran’s history and culture, corrects this lacuna. He details the development of the education of modern physicians starting in the 1850s. And highlights the important and influential role of American physicians in helping shape the culture of Iranian hospital care, including making it acceptable to Iranian patients. American missionary hospitals played a crucial role through the founding of the first medical school in 1885 in Urumiyeh. There were also two other medical training programs at American hospitals in Hamadan and Tehran. By 1930, most Iranian physicians trained in Western medicine had been educated either at the American University of Beirut, medical schools attached to American missionary hospitals, or in Europe.

In 1915, American physicians also began the first school to train nurses. Later, in 1936, the government of Iran asked American missionary nurses to direct and run the five government schools for nurses. American and British physicians were the first to establish a rigorous ob-gyn program with pre- and post-natal care, including baby clinics to combat the high child mortality rate in Iran. This model was later adopted by all Iranian hospitals. American physicians also introduced the X-ray machine, the hospital laboratory, and other techniques to enhance medical diagnosis and treatment. All these were established through an environment of cooperation, collegiality, and professional cooperation with their Iranian colleagues through seminars, and the creation of medical societies in Mashhad and Tehran.

The final chapter tells the history of leprosy in Iran, and the establishment and functioning of the first leprosarium in Mashhad by American missionary physicians in collaboration with the Imam Reza Shrine Foundation.

This book will reward those interested in the development of modern medicine in Iran and the role of women in its health care system.

Willem Floor studied development economics and non-western sociology, as well as Persian, Arabic and Islamology from 1963-67 at the University of Utrecht (the Netherlands). He received his doctoral degree from the University of Leiden in 1971. Since 1983, Dr. Floor was employed by the World Bank as an energy specialist, however, after his retirement in 2002, he has dedicated his time to the study of the social and political history of Iran, and has published extensively throughout this time. His books include: Public Health in Qajar Iran, Agriculture in Qajar Iran, and The History of Theater in Iran, as well as, The Persian Gulf: A Political and Economic History of 5 Port Cities, 1500-1730, its second volume, Persian Gulf: The Rise of the Gulf Arabs, 1747-1792, third volume, The Rise and Fall of Bandar-e Lengeh, the fourth volume, Bandar Abbas: The Natural Gateway of Southeast Iran, and the fifth volume, The Persian Gulf: Links with the Hinterland Bushehr, Borazjan, Kazerun, Banu Ka’b, & Bandar Abbas, The Persian Gulf: The Hula Arabs of The Shibkuh Coast of Iran, and The Persian Gulf: Dutch-Omani Relations A Commercial & Political History 1651-1806, and The Persian Gulf: Muscat – City, Society and Trade . He has also published, Travels Through Northern Persia, 1770-1774, Titles and Emoluments in Safavid Iran, and A Social History of Sexual Relations in Iran; Labor and Industry in Iran, 1850-1941; Guilds, Merchants and Ulama in 19th Century Iran; The Rise and Fall of Nader Shah; Games Persians Play, and History of Bread in Iran. His translations include: Samuel Gottlieb Gmelin’s Travels Through Northern Persia 1770–1774 , and with Hasan Javadi, Abbas Qoli Aqa Bakikhanov’s The Heavenly Rose-Garden: A History of Shirvan & Daghestan; Evliya Chelebi’s Travels in Iran and the Caucasus, 1647 and 1654; A Man of Two Worlds: Pedros Bedik in Iran, 1670–1675, Awake: A Moslem Woman’s Rare Memoir of Her Life and Partnership with the Editor of Molla Nasreddin, the Most Influential Satirical Journal of the Caucasus and Iran, 1907–1931, and Engelbert Kaempfer: Exotic Attractions in Persia, 1684–1688: Travels & Observations.